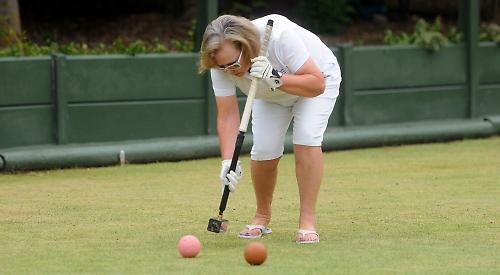 CROQUET returned to Phyllis Court in earnest with the launch of the main season on Monday.

Confidence is at an all-time high at the Henley club thanks to last season’s best ever runners-up spot in the National Inter-Club Championship and the news that their top ranked player Charlie von Schmieder expects to have increased availability this term.

Phyllis Court have a first-round bye in this season’s championship and so their A team focus will first be on the Southern Croquet Federation (SCF) League which has been enlarged by two new teams this year.

Their potential test is a tricky away fixture against East Dorset at Poole on April 19.

There will be action aplenty at home that day too when Phyllis Court B and C play their traditional season opener in the SCF handicap League, itself enlarged by two new teams for the 2019 edition.

The Phyllis Court selectors have an embarrassment of riches at all skills levels and there will be keen competition for all team places, as newer players like Tony Peperell and Bill Pitkeathley, have moved into the selection frame for the handicap teams.

Meanwhile a representative Phyllis Court team has already seen competitive action this season in a history making first ever match under floodlights at Roehampton last week.

The much-improved Dianne Browne sealed a fitting 5-5 match result in this friendly encounter when she put an inch perfect first ball to the last hoop of her final doubles game partnering man of the match Roger Goldring who was undefeated in his four games. Chris Roberts and Raghu Iyer enjoyed more limited success but fully embraced the unusual experience of playing under lights.

Roberts and Frances Colman were in fine form at Somerset West, near Cape Town, earlier in the year where they recorded their best performances yet at their annual appearance at the Southern Cape Association Croquet Championship.

Colman was a double runner-up in both her class and the handicap event, showing an over-due return to the form she enjoyed before a string of injuries that have marred recent seasons.

Roberts improved his world ranking no end with valuable wins over higher ranked opponents Mike Town and Lionel Tibble to reach the main event final for the first time, where he tested England international Mark Avery for just short of two hours before succumbing to defeat.

Other Phyllis Court players, Helena and Mike Fensome, also sought the sun in our off-season and competed in the Florida Regional Championships and the USA National Croquet Centre in January, and soon after their visit, Tony Peperell played there too.

At the other end of the experience level, 22 new players will be beginning their croquet careers at Phyllis Court with four session introductory courses this week and next.

These new players extend still further Phyllis Court’s title as the biggest club in the UK with 167 members, nearly all of whom have also taken up membership of the national governing body, The Croquet Association, showing wonderful support of the sport.