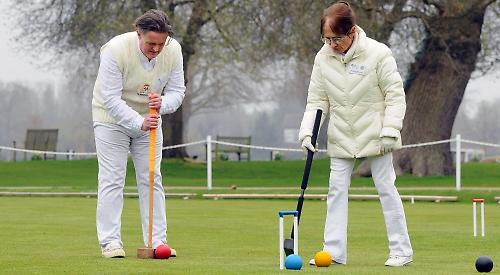 PHYLLIS COURT’S top three players will be in the strongest ever British tournament line-up outside of an open championship, when they compete in the Surbiton Championship Series Open this weekend.

Irish international Charlie von Schmieder makes a rare appearance along with current Phyllis Court champion Raouf Allim and club chairman Chris Roberts in a field of 20 that includes four of the England team that defeated Spain in Cadiz last month.

The impressive field is thought to have caused by players wanting to lay down an early season marker in advance of England hosting this year’s WCG Simon Carter World Championship in Sussex and Kent from July 27 to August 4.

Von Schmieder has been selected for one of two Ireland ‘member’ places for the world championship and Allim, Roberts and clubmates Roger Goldring and Helena Fensome will attempt to join him via the qualifying tournament at Guildford a few days earlier.

While Phyllis Court’s top trio are battling it out in the championship series this weekend, the club’s two other top 100 ranked players, national veterans champion Roger Goldring and Ian Norris will be in action in the second tier A-level series at Cheltenham, where they will start among the favourites. Back on home turf at Phyllis Court, the first week of beginners training courses closed with the first seven new recruits successfully meeting the pass grade of mallet skills and quite complex understanding of tactical situations.

Patricia Mulcahy, Allan Henderson and Phil Johnson are the stand-out performers so far from the class of 2019 but with up to 20 more new players likely to be put their through their paces in the weeks ahead, they are likely to face a challenge for the best in class tag, under the tutelage of Chris Roberts, Frances Colman and Helena Fensome.