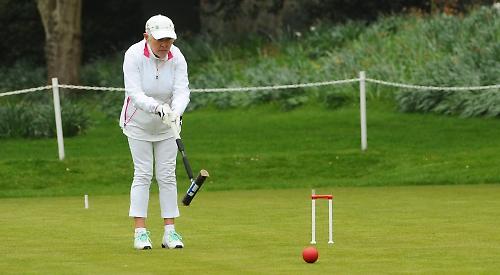 The Zero plus is a new addition to Phyllis Court’s roster of tournaments that are open to visiting players and they came from near and far, including Australian Steve Thornton and Luis Álvarez-Sala Vázquez who flew-in especially for the two-day event.

The 16-player field was split between the two venues on Friday for the initial group stage, with the top four from each group qualifying for Saturday’s main Cup event at Phyllis Court and the remainder playing in the Plate at High Wycombe.

Shore won the more northerly group where the battle was with the high winds as much as the other players.

Phyllis Court’s Robin Coates came through unexpectedly from an unfancied seeding position to qualify in fourth place but there was no joy for Helena Fensome, and none either for Peter Haydon or Mike Fensome in the Phyllis Court group, although the latter did only just miss qualification by a net hoop count.

Coates started well on the Saturday with a win against Australian Thornton and again out-played his seeding for the rest of the day.

But it was Shore who was the man to beat and it took until the penultimate round of seven before he dropped a game, and with a huge net hoops advantage going into the last round, the tournament was all but won despite an increasing display of nerves as he wrapped up the victory.

Mike Fensome had a good second day in the biting cold at High Wycombe and ended runner-up in the Plate competition.

Meanwhile there was drama at Poole in Dorset on Monday when Phyllis Court A teams opening league fixture ended with Roger Goldring’s spectacular 20-yard hoop score in the deciding match with East Dorset.

The Henley team were looking down the barrels of defeat after Chris Roberts had let a one game lead over Tom Weston evaporate with a last hoop loss in his best-of three match, tying the overall score at 3-3 with just Goldring’s rubber to complete, and his opponent Steve Leonard ready to score easily. Goldring’s long shot from the north boundary had the double target of hoop 12 of Leonard’s ball as it smashed through the hoop at pace, causing celebration from team mates, Raouf Allim, Helena Fensome and Roberts.

Fensome had brought home the goods in this fixture by winning both her singles matches, to Roberts and Goldring’s single contributions.

Phyllis Court B wrapped-up a comfortable win in their traditional SCF Handicap League season opener against a new-look Phyllis Court C at the Henley club on Monday.

The victories were shared around as would be expected in handicap play, but three wins apiece for the B’s Colin Morgan and Raghu Iyer, and C’s Bill Pitkeathly were the highlights.

Back at Phyllis Court, 24 new players have been taken through an initial beginners training course in the last three weeks.

Most have begun joining in with existing members at the three times a week mix-in sessions already and four have entered the club’s internal drawn partners tournament.