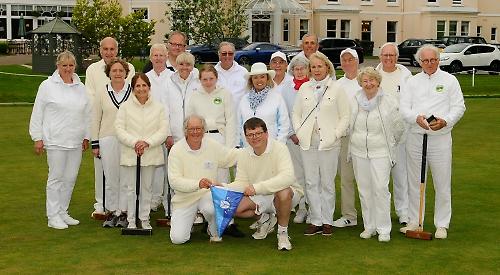 PHYLLIS COURT A crashed to an unexpected 4-1 home defeat by neighbours High Wycombe on Monday.

Things started badly when even before play, Phyllis Court lost captain Chris Roberts who was called away for a family matter but with the experienced Helena Fensome coming off the bench, confidence for a second league win of the season was still high.

However, the morning session went the visitors’ way with Richard Peperell and Alan Clark beating the hosts’ Ian Norris and Fensome respectively and the doubles rubber being temporarily halted at 1-1.

It then went from bad to worse for Phyllis Court when a back injury forced the withdrawal of their number one Raouf Allim, which handed High Wycombe an almost certain victory due to the hosts having to concede his matches.

At 2-0 down on the scoreboard but potentially trailing 4-0 if the defaulted matches were to count, the remaining three afternoon singles matches were all about saving face, but Norris and Fensome both lost again and only captain for the day Roger Goldring recorded a match win.

The gallant High Wycombe captain Ian Shore declined to claim Allim’s defaulted matches which was a sporting gesture and the recorded 4-1 score line was evident enough of High Wycombe’s superiority on the day. The news was no better late last week when Phyllis Court B were thrashed 12 – 4 away to league newcomers Blewbury B, with only Mike Fensome’s 50 per cent win rate providing a glimmer of form.

Phyllis Court did find success when they entertained visitors from Hamburg CC for a mixed abilities friendly match last Friday. The Hamburg team included 16-year-old Smilla Vinnen, who will be competing for Germany in the U21s World Championships at Nottingham in July. Phyllis Court ran out rather comfortable 19-4 winners.

Peperell retained that title for the third year in a row, the last two times partnering Iyer.

Wednesday of last week saw the second running of Phyllis Court’s C-Level tournament for players with handicaps of 7+, which is part of the National C-level Series, and the host club was left still looking for a first home winner.

Tony Peperell showed well in the group games stage and was the only home player to qualify through to the second knock-out phase, only to be eliminated in the quarter-finals by the eventual winner Glynis Davies of Northampton.

Away from Phyllis Court, tournament circuit players were again in action this past weekend, this time at Roehampton and Hamptworth.

At the former Chris Roberts and Frances Colman dropped only one game in five to finish runners-up in the AC handicap doubles event that is part of a week of action in South London.

Their loss was crucial though, coning as it did at the hands of eventual winners, father and son Tim and Sam Russell of Roehampton.

At Hamptworth, near Salisbury, many of the players who had lined up for the Phyllis Court and High Wycombe Zero Plus tournament two weeks ago, re-assembled along with others who were new to this level of competition.

All eyes are now turning to the National Inter-Club knock-out where Phyllis Court get their campaign underway with a tricky home tie against Woking on June 29, when it is hoped that the ‘big match bad weather curse’ does not strike again to keep spectators away.

There was conformation of the starting line-up for the GC British Open this week, with Phyllis Court’s Raouf Allim, Chris Roberts and Roger Goldring and Peter Haydon all winning places on their national rankings.