New ladies’ champion has a reduction in handicap 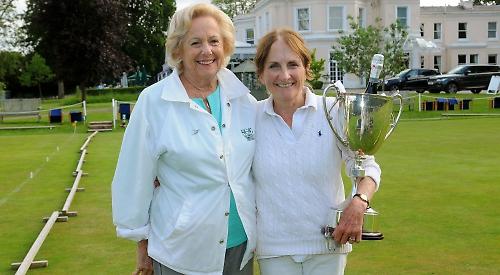 DIANNE Browne enjoyed a good week that started with lifting the Phyllis Court Ladies’ Singles Cup for the first time and ended with a handicap reduction.

A field of just five players contested the ladies title but they included the top three active golf croquet women players in the club.

A double all play all format, with two games against each opponent was the favoured format, and all the surprises happened in the first round when both Delia Norris and Browne beat the hot favourite and three-time winner Helena Fensome.

Sally Tooher withdrew after the first round-robin of games, at which point Norris headed the field thanks to a crucial win over Browne.

Dee McKinbbin made light of her high handicap status and took Norris to the 13th and final hoop.

Fensome regained some ground with wins over the remaining field to come back into contention, such that going into the last round there was the potential of a three-way tie on games wins, meaning that net hoops count might be needed to find a winner.

Fensome and Browne both won their last games to create that tie, which was resolved with Norris on +6 hoops, Fensome +10 and the new winner Browne +15 who was presented with the cup by event patron Rosie Richardson. Buoyant Browne topped her tournament win by carrying forward her good form to star for Phyllis Court B in an impressive 12-4 victory over Caversham when she won all four of her matches.

These two impressive performances earned Browne an automatic handicap reduction to a new low of three and is a just reward for her improved play this season.

There were good results all round for Phyllis Court B with captain Raymond Wood contributing three game wins that were matched by Mike Fensome, who conceded a huge number of handicap extra turns, and Norris who won 50 per cent.

It was a damp squib however for Phyllis Court C two days later when the rains soaked the courts to force the postponement of their league fixture against Harwell which has been re-arranged for June 21.

Also in action last week was the Phyllis Court ‘Friendly’ team, which was made up of mostly high handicappers to match the strength of opponents High Wycombe.

Dianna Zatouroff and Rick Lilley were the star turns winning three of their four games as the Henley team went down narrowly 9-7.

On the national tournament circuit, Roger Goldring made the cut to the knock-out stage of the top flight Cheltenham Open and got a game off UK no.25 Tim King before going out in the quarter-finals.