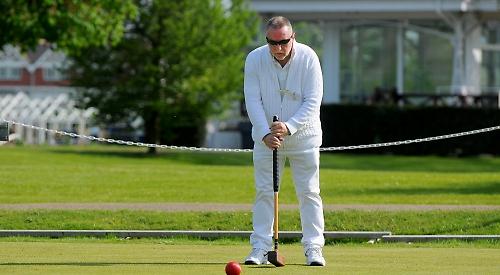 The event restricted pairings to those with a joint handicap of 10 or more and attracted a capacity field of a dozen teams.

Russell Robinson was another newcomer to feature well under the guidance of Frances Colman, as their pair reached the semi-finals before going down to the eventual winners.

The other half of the afternoon knock-out draw saw Helena Fensome and Madeleine Probert beat Dianne Browne and John Maguire in the semis, to set a final with Mr and Mrs Fensome in opposition.

The Phyllis Court A team recorded a 6-1 away win against league newcomers Bransgore on the Hampshire coast last week.

Although there was an easy win in the doubles rubber for Raouf Allim and Roger Goldring, as the morning progressed things started to look less comfortable for Phyllis Court’s top team.

Helena Fensome had lost 2-0 to the higher handicapped George Baylis, Ian Norris had surprisingly lost his first game of three to his lower ranked opponent Sonia Hemsley and Goldring, who has started his afternoon singles match early was 6-4 down to Lexie Oakenfold. Goldring did well to rescue that game to win 7-6.

On the association croquet front last week High Wycombe’s Keith Pound won the joint hosted Phyllis Court and Blewbury AC Handicap tournament for the third year in a row, ending undefeated in his seven games over the two days.

Phyllis Court were represented by Richard Peperell, Frances Colman and Raghu Iyer in the eight-player field that included visitors from as far away as Camerton and Peasedown (Bath) and Bowdon (Lancashire).

A combination of an abandonment for heavy rain and a league fixture that had to split over two sessions due to player non-availability, meant complications for Phyllis Court’s AC team last week, eventually resulting in a 2-2 draw with High Wycombe and an interim 1-1 score line at Eynsham, with two games still to play.