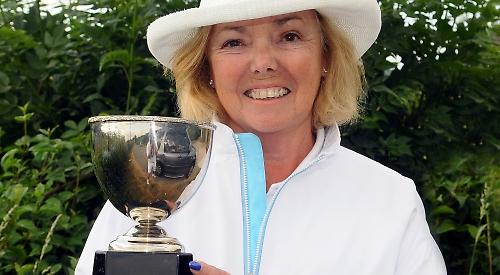 After a disappointing opening day and in the handicap event, she bounced back to win twice on day two and took that good form in to the three-day advanced class event that followed.

Here Phyllis Court’s Colman swept the board and went into her last game on Saturday morning, full of confidence against Geraldine O’Rourke from Ireland, whom she had beaten narrowly in the handicap event.

The last match saw O’Rourke needing to win to peg back the undefeated Colman, in order to win on the ‘who beat whom’ tie break rule.

The game was fittingly close in the first and second hours with both players safety play to the fore.

Colman held a slim three hoop lead as the last 15 minutes approached and crucially had the innings, so was able to control the end of game phase, and in fact she stretched her lead and winning margin to +8 at the close on time.

Phyllis Court’s other representative, Chris Roberts, won four of his eight games in the A-Class event and improved his ranking to just outside the UK top 100.

Sunday evening saw the conclusion of Phyllis Court’s Handicap League match with Eynsham, which had unusually been arranged to be played in two halves and at split venues.

Last week, a win for Roberts and defeat for David Hopkins away at Eynsham meant there was all to play for with Richard Peperell and Raghu Iyer flying the Phyllis Court flag in the home leg.

Peperell came up against former Scottish international Stephen Wright and put up a good fight before going down narrowly, 26-21.

In golf croquet Phyllis Court A scored a comfortable 6-1 win at Blewbury.

Raouf Allim and Roger Goldring cruised to an easy win in the doubles first game against lower ranked Steve Fisher and David Grinstead, and were 5-2 up in the second, with the scent of victory in the air.

Good clearances from the Blewbury pair then saw them burst back in to win the second game before order was restored thereafter, the third game being won easily by the Henley duo.

Helena Fensome was taken to a deciding game before defeating Blewbury’s David Seed, and coming in for a rare A team outing at number four, Robin Coates went down in a three-game match to the experienced David Vincent.

In the afternoon Allim had a two game win against Fisher and Goldring and survived a sticky moment at the 12th hoop of his second game before Grinstead accidentally peeled Goldring’s ball to give him that rubber 2-0.

Coates bounced back from his morning upset to beat Seed in style 2-0, but Fensome again lost a game before coming back to defeat Vincent for her second match win of the day.

In other team matches last week, Barrie Scott kept his nerve on his debut for Phyllis Court C when he had to score the last hoop of the match to secure a win against Blewbury B. Russell Robinson and Rick Lilley also made their team debuts for a Phyllis Court friendly team that went down 6-3 away at Thames Valey at Abingdon.