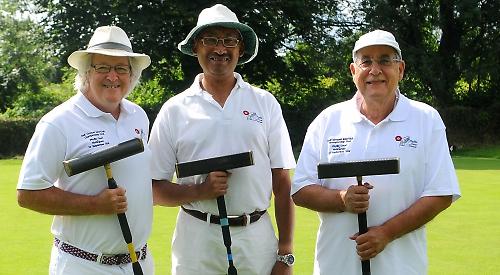 PHYLLIS COURT beat Surbiton 3.5-1.5 on Sunday with their best performance of the season to qualify for the semi-finals of the National Inter-Club Championship for the third season in a row.

Playing an unfamiliar three players each side format due to the hastily arranged fixture, Phyllis Court won both the morning rubbers.

Surbiton’s team were better ranked player for player than the Henley side, but that mattered little as Roger Goldring (handicap -1) blew-away Nick Cheyne (-1) in the number three’s singles match 7-3, 7-2.

It was the same story in the doubles rubber between the number one and two players, where Surbiton fielded former World AC Champion Stephen Mulliner (-5) and Chris Farthing (-3), but they were undone by Phyllis Court’s Chris Roberts (-2) and Raouf Allim (-2), who raced away to win the first game 6-1.

They were soon in dreamland and ahead in game two, but Mulliner’s experience and sharp centre-ball clearances clawed back that lead and eventually Roberts needed to score hoop 12 to draw level and hope for a Surbiton error at hoop 13 which didn’t come, and the second game was lost 7-6.

The Phyllis Court doubles pair again started well in the third and deciding game and before long everything was going their way, with reliable jumps shorts from Allim and long-range clearances by Roberts, they beat the rankings with a second 7-1 winning score line.

At 2-0 up in the match, with three singles to play after lunch, Phyllis Court confidence was sky high and soon enough it was realised too.

Mulliner stepped up a gear, came from behind to beat Roberts 7-5 with two memorable centre ball clearances at hoop 11 and turned the screw further to win the second game 7-3.

But by then Allim had won his first game versus Cheyne 7-2 and was 4-0 up in the second. Cheyne mounted a spirited comeback, but Allim closed the game out 7-3 to secure the Phyllis Court victory.

Goldring had lost his first game to Farthing 7-5 and looked to have thrown away control of the second with a failed jump shot at hoop 10 that scored for his opponent and conceded first approach to hoop 11.

That hoop was lost but Goldring played the last two hoops very well indeed and coolly scored hoop 13 from distance to level his rubber, which was then ‘halved’ with the match result already decided.

Phyllis Court will now travel to Roehampton in the semi-finals.

The same Phyllis Court trio – Roberts, Allim and Goldring – were straight back in action on Monday, but this time as individual players, when they contested a 24-player qualifying event at Guildford, for the WCF Simon Carter GC World Championships being held next week in Sussex and Kent.

Roberts fared best on the opening day with five wins from his six games, whilst Allim on three wins and Goldring on two, rued some missed opportunities.

Playing alongside the Phyllis Court Inter-club match, Peperell won forty per cent of his games but this was the year of the Irish who won the match 14-10 and won back the McWeaney Trophy which is an ornate silver cigar box.