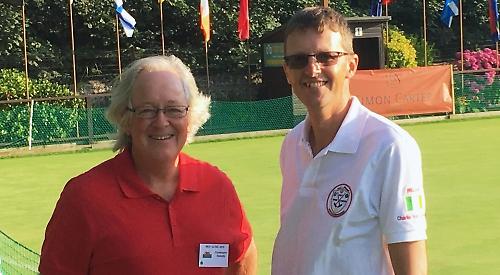 Chris Roberts won a place in the starting line-up thanks to a good performance at the qualifying tournament last week, where club mates Raouf Allim and Roger Goldring missed out narrowly at the end of an exhausting four-day event at Guildford.

Allim was unfortunate to finish in eighth place with seven to qualify.

Roberts is playing under the Welsh flag and joined fellow Phyllis Court player Charlie von Schmieder at the nine-day main event that is taking place in Sussex and Kent this week, with the latter having been selected for one of the two ‘member places’ granted to the Croquet Association of Ireland.

The 80-player championship has drawn players from 19 countries including strong croquet nations Australia, New Zealand, USA and Egypt as well as Spain, Latvia and, for the first time, Uruguay.

After four days play at Southwick (near Brighton), Eastbourne, West Worthing and Tunbridge Wells, the tournament was nearing the end of the block or group stage from which 32 players will emerge to contest the championship knock-out.

Von Schmieder has done well so far and with five match wins from his first seven, and sits on the verge of qualification to the knock out, with one more victory in either of his remaining two matches likely to be the necessary requirement.

His victims have included USA international Jeff Soo and, most impressively, the number two seed in his block Karim Ghamry of Egypt.

Roberts has also played above his seeding with a first day straight games victory over England international Lionel Tibble and further successes against Lester Hughes of Australia and Scotsman Fergus Thompson. However, the plate event now beckons for the Phyllis Court chairman.

This championship has been perhaps the most competitive yet in the 20 year history of the event with many an upset for the established stars, including one for chief Steve Leonard who beat two-time World Champion Ahmed Nasr.

There was success also for the Phyllis Court Association Croquet team who won a friendly match at Roehampton 4-3.

On the internal front, the annual Over 80s tournament attracted eight competitors and was won by Mike Fensome who defeated Ralph Chambers in the final and he was presented with the Yellow Ball trophy for the first time.