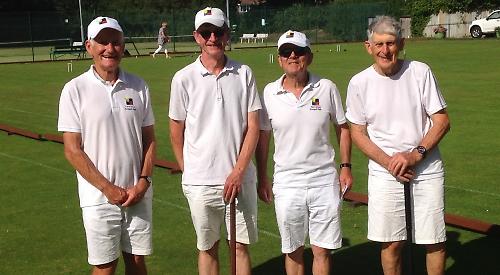 The 82-year-old professor of sociology earned his side a 2-2 draw at Ryde, Isle of Wight, in the Southern Croquet Federation’s Association Croquet Handicap League (South).

With the scores level after three hours’ play, Wakeford ran the decisive hoop following nearly half an hour of extra time.

Speaking after the match Wakeford said: “I’m delighted. That’s my first ever singles win in a league match.”

Things had looked bleak for Caversham when both Brian Jamieson and David Dibben suffered heavy defeats. But then Peter Adams gave them a chance of sharing the spoils by snatching a one-point win after ‘time’ had been called. That set up the chance for Wakeford’s face-saving victory.

Caversham chairman Jamieson said: “We are having a very good season. We didn’t win any league matches last year but this time we should finish mid-table in the AC League, we’re doing well in the Golf Croquet Handicap League and we have already won the Single Lawn League.”