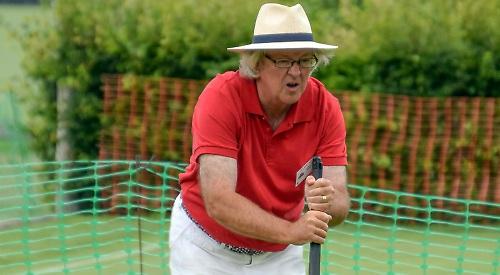 BOTH Phyllis Court players in the WCF Simon Carter Golf Croquet World Championship outplayed their seeding positions, in the nine-day event that finished on Sunday.

Ranked to win four and two block games respectively, Charlie von Schmieder (representing Ireland) and Chris Roberts (Wales) won five and four matches in the first phase of the championship that saw 80 players from 19 countries gathered at Southwick near Brighton and three other locations in Sussex and Kent.

The Phyllis Court pair were not seeded to qualify for the top 32 knock-out phase, and that was how it turned out, although von Schmieder was only one win short, so their interest switched to the plate event that ran parallel to the main event for a further three days, where Roberts won 50 per cent of his plate games and von Schmieder slightly less.

Although having only started playing croquet in April, Russell Robinson has already qualified for two national finals. Victory in Worcestershire at the Broardwas C-Level Series tournament last week qualified Robinson for the natural final of that series at Cheltenham next month.

Robinson had already reached the final of the club’s internal 8+ tournament, and that earned him a place in the national final of the grass roots competition being held also next month in Bath.