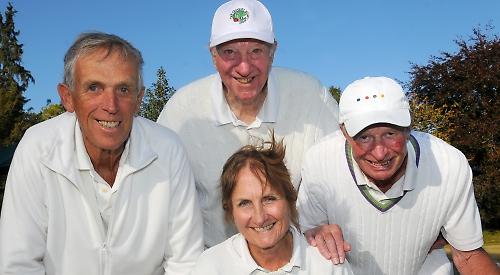 Visitors Bransgore from the New Forest struggled with the fast pace of the host’s courts as Phyllis Court got off to a good start, taking a 3-1 lead in the first of four rounds of singles games.

Thereafter each subsequent round was shared 2-2 with Robin Coates the top player of the day winning all four of his games, but the match was not without the last game drama that has become a feature of Phyllis Court’s season across the board.

Eventually it boiled down to the last game to finish between the consistent Mike Fensome and Bransgore’s Brian Davies, where a win for the visitors would draw the match but give his side a tie-break victory on the result of this head to head game between the two number one players.

The Phyllis Court player seemed to be well in control at 6-5 up with two hoops to play and commanding field position, only for a lack of concentration that saw Fensome strongly clear away his own partner ball instead of his opponent’s, and with that blunder, the game moved on to the final hoop 13. Both players missed hoop shots from five yards before a series of good clearance strokes was eventually broken by a miss from Davies that allowed a relieved Fensome to score from close range to bring the title to Phyllis Court for the first time since 2014.

Meanwhile Russell Robinson, who didn’t pick-up a croquet mallet until April this year, came close to ending his first season in the sport with a national title.

Robinson was just one win away from overall victory at the C-Level Series National final at Cheltenham last weekend and it is a mark of his ambition that he is rueing a 5-3 lead that he let slip in a pivotal game late on the second day.

That loss saw him finish on 10 wins from his 15 games, just one win behind but with a superior net hoops advantage over the eventual winner Izzy Poyntz from Yorkshire.

Robinson is the Phyllis Court find of the season and is by far the most improved player, having earned a record breaking five automatic handicap reductions in as many months, won the club’s open doubles tournament with Roger Goldring and the seven-plus season-long singles competition.