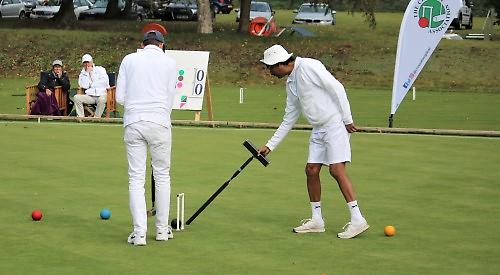 HOST club Phyllis Court went down to a 6-1 defeat in the final of the Inter-Club Championship last Saturday as Nottingham cemented their position as the strongest club in England with a solid performance to retain the trophy.

The visitors’ team selection of three players with -4 handicaps and one -3 saw them as strong pre-match favourites against Phyllis Court’s -3, -2, -2 and 0 and in an ominous start, England international Richard Bilton’s quick-fire 7-0 demolition of Ian Norris in their first game lived up to the billing.

Norris did well to come back from that drubbing to take Bilton to the 13th hoop in their second game before losing 7-6 and there were close results elsewhere too, with Chris Roberts’ agonisingly close 7-6, 7-6 loss to 18-year-old Euan Burridge while the Phyllis Court doubles pair let a 5-1 lead evaporate in their second game against international duo James Death and Ian Burridge.

Faced with a 3-0 deficit at lunch, Phyllis Court needed to win all four of the afternoon matches, which looked like a tall order but, as so often this season, a good fighting back spirit was again produced for the entertainment of the spectating gallery — that included players from Blewbury, Caversham, High Wycombe and Ealing clubs — who had turned out in good numbers despite the overcast day.

There was also good play shown in the head to head matches between the number one and two players as Phyllis Court’s von Schmieder won the first game against Death and Allim won the second game of his rubber against Ian Burridge.

However, Nottingham weathered the comeback well with good centre ball strikes by Death and Burridge to wrestle back control for 4-7, 7-4, 7-4, 7-4 and 7-5, 6-7, 7-1 victories while Roberts toiled well but ultimately was left to rue missing too many hoop shots in going down to Bilton 7-3, 7-6.