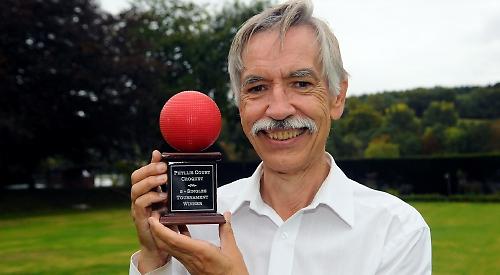 THE rise through the ranks at Phyllis Court saw Russell Robinson ambitiously step up in class last Friday and still win, taking the club’s 3+ singles tournament title and the converted Red Ball trophy.

This was a remarkable feat by Robinson who only picked up a mallet for the first time six months ago.

Several previous winners of the Red Ball trophy have gone on to higher standards still, and in the cases of Roger Goldring and Ian Norris this has meant national cup final appearances and championship series croquet.

The decision to postpone this tournament from the middle of the summer because of player unavailability was vindicated when the participation number doubled that of last season in what was a close encounter.

Showers were endured and tough hoop settings left over from the cup final proved challenging as proceedings got off to an unexpected start when four of the five opening round games were won by the under-dog player.

Only Robinson took an unblemished record into round three, which was pointer to the closeness of the rest of the field, and a third win saw Robinson as the man to beat with a one win advantage going into lunch.

As the chasers whittled themselves down for the right to be pitted against the leader, his stiffest tests were still to come, but he held his nerve going to the last and penultimate hoops in his last two games to record 7-6 and 7-5 afternoon victories against Raymond Wood and Raghu Iyer.

Robinson ended with a final tally of one game win advantage against Colin Morgan, with a head to head victory to boot and two wins ahead of Iyer and the much-improved Jeff Smith.

Undefeated Robinson reduced his handicap for a record sixth time down to the five mark.

Meanwhile at the top end of the club, Raouf Allim and Roger Goldring had to work hard in order to win the GC Open Doubles season-long competition title, in a close final on Saturday morning.

Opponents Charlie von Schmieder and Mary Gaynor were kindred Irish spirits and impressed throughout and especially so early on, when they won the first game 7-5 and lead the second 4-2.

But Allim and Goldring had the big match experience to clinically secure that second game 7-6 at the last hoop.

They then seemed to be well in control of the deciding third game and established a 5-3 and then 6-4 lead thanks to Allim’s deft jump at hoop 10.

But the Irish duo were not laying down without a fight and a neat promotion of Gaynor’s ball by von Schmieder as he scored hoop 11, made a fight for the penultimate hoop which they eventually won but conceding the first stroke to the last hoop 13 was always going to be crucial and Goldring was able to score from two yards to complete the 5-7, 7-6, 7-6 match and title winning score-line.