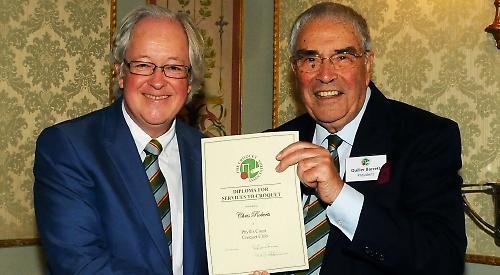 CHRIS ROBERTS, chairman of Phyllis Court Croquet Club, has been awarded a Croquet Association Diploma for Services to croquet at the Association’s annual general meeting on Saturday.

Roberts is only the third recipient of this national award from Phyllis Court, following Brian Bucknall and Vivian Thomson in 2014 and Frances Colman three years later.

Croquet Association president Quiller Barrett made the award and read a citation which detailed Roberts’ contribution to his club, area and national associations and was pleased to report that Phyllis Court has grown into the biggest croquet clubs in the country under Robert’s stewardship.