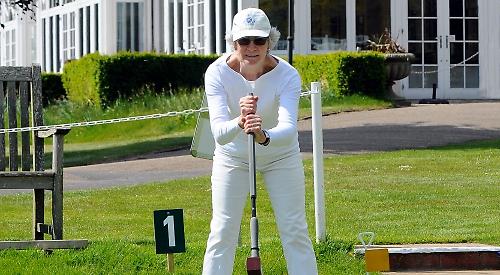 CROQUET has re-started at Phyllis Court Club in Henley following the easing of the coronavirus lockdown restrictions.

More than 60 members played in the first week alone, while adhering to the Government’s directives and the Croquet Association’s advice on how to play safely to minimise the spread of covid-19.

The croquet club at the private members’ club hastily drew up some big changes to their operating rules in order to abide by social distancing guidance and other measures.

The changes include singles play only and a prohibition on double-banking, which is a unique arrangement in sport whereby two games can operate simultaneously on the same court.

All games must be pre-booked in advance on the croquet club’s new booking system which was introduced to prevent too many players arriving at the same time.

The club has also suspended its members’ mix-in sessions.

Competitive play was also re-launched this week in the respect of Phyllis Court’s season-long competitions. These are still possible because they are a series of one versus one matches. However, single day multi-player tournaments are still off limits for the time being.

Madeleine Probert, who is the club’s croquet chairman, played the first stroke after the lockdown restrictions were eased.

She said: “Members are delighted to be back playing again and many are arranging socially-distanced games with someone from another household.

“For our members who live on their own it’s wonderful for them to be able to see friends again and it’s giving us all a sense of some normality in our lives.”

• HENLEY Parkrun, a free weekly 5km run around 40 Acre Field, off Tilebarn Close, has now been suspended until at least the end of June due to the coronavirus pandemic.