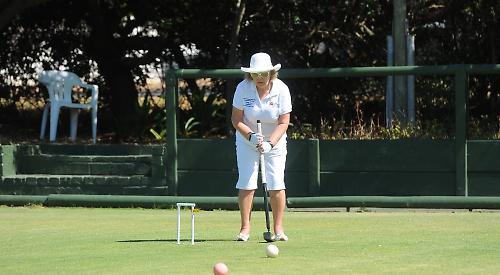 Only the singles events are available, with doubles play prohibited by the Croquet Association’s temporary rule to minimise the spread of coronavirus.

The club is offering three classed competitions, headed by an open event for the Club Championship and augmented by events for players with handicaps of 3+ and 7+, with all three formatted as seeded straight knock-outs. A non-seeded handicap competition will also be played.

This comes after the cancellation of four of the club’s five nationally advertised events and half of the internal tournaments, which were scheduled in April and May.

Tournament play around the country is also currently suspended.

The last event to feature Phyllis Court players was the Southern Cape AC Championship in South Africa in February where Frances Colman won her singles class trophy and Chris Roberts was runner-up for the second year running in the open singles event.

Both players recorded wins against higher ranked opponents during the eight-day tournament.

Colman was handed a tough assignment when her C class event was combined with the tougher B class, meaning she faced a string of higher ranked players.

She began with victory over Midlander Paul Swaffield before taking the scalp of the top seed, South African Sylvia Short but lost by a single point in the last turn of her match with Surbiton’s Chris Osmond.

He also beat Short on his way to a semi-final berth where he took a third scalp of the week with a win over Surbiton’s George Noble.

Roberts then faced Jim Field, whom he lost to in an early block game, in the Championship final but was no match for his accuracy.