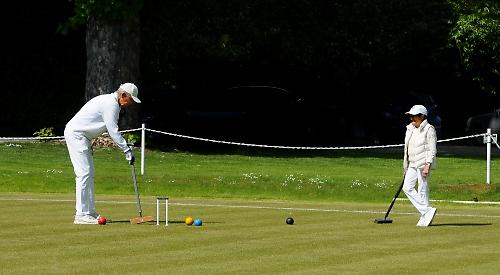 With the Government’s announcement that groups of up to six people from different households are now permitted to gather, the Croquet Association moved to sanction doubles play.

The national body has also permitted “double-banked” singles, which allows two games to be played simultaneously on the same court.

Phyllis Court’s members have taken every opportunity to fill the three operational courts and the croquet club is the biggest in the country with 185 members. More than 80 players have played so far, with more returning daily.

Competitive play was also boosted by the latest easing of lockdown restrictions, with the deadline for entries to Phyllis Court’s season-long competitions falling this week and the restart of team matches expected shortly.

The club will compete in a truncated National Inter-Club Championship this season where the biggest hurdle for their four-player team will be having to travel separately to venues around the country as they bid to go one better than their runners-up positions of the last two seasons.

Phyllis Court will avoid champions Nottingham in the seeded draw this week but could face long journeys to clubs near Brighton or Bath.

The Southern Croquet Federation, covering Oxfordshire, Buckinghamshire, Berkshire and Hampshire, are poised to make a belated start to their league competitions in which Phyllis Court will be fielding an extra team this season following the introduction of a new event for players with handicaps of 3+.

Phyllis Court “A” will defend their Southern Federation Championship, the “B” side, which won the Handicap League in 2019, will step up to the new 3+ B-Level League, and the “C” side will be joined by a new “D” team in the Handicap.

With so much of the season lost already, and distances as far away as the Isle of Wight to contend with, it is unlikely that a full programme of league matches will be possible in any of the four events.