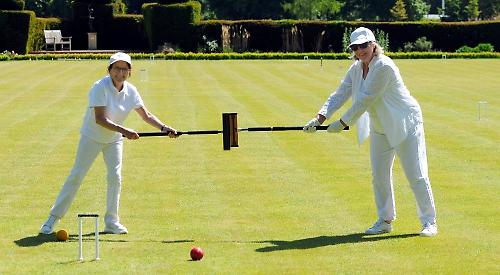 PHYLLIS Court Club in Henley drew the short straw in the National Inter-Club Championship this week and face a long away trip to Camerton and Peasedown Croquet Club, near Bath.

But the visitors will be confident of a win in this first match of the competition and will have to guard against complacency when they travel west with a side that is likely to be much higher ranked than their hosts.

The two teams have met just once before in this competition, back in 2016, when Phyllis Court ran out comfortable winners 5-1.

The match, which was played in heavy rain throughout, eventually had to be completed on a remaining smaller court when the main lawns became waterlogged.

The Inter-Club Championship has been truncated this season by multiple withdrawals and now features just eight teams, making all first round ties immediate quarter-finals.

Potential difficulties in travelling arrangements, with all players required to travel independently due to the covid-19 restrictions, has decimated the usual field of entrants by two-thirds.

However, the competition has retained reigning champions Nottingham, who beat Phyllis Court in last season’s final, and other strong sides such as Ashby and Roehampton.

Phyllis Court member Richard Peperell has been playing a lot of croquet since the easing of the lockdown and has displayed some excellent early form in some quick-fire internal competition games at his primary club, High Wycombe, resulting in his handicap reducing from two to one.

Raouf Allim will defend his club championship title in a field of 16 in the open knock-out competition, which also features number one seed Charlie von Schmieder and Chris Roberts, who both played in last season’s world championship.

Raghu Iyer and Dianne Brown are first and second seeds respectively in the 15-player 3+ singles event but the big numbers are in the 7+ where 41 players line up behind top seed Tony Peperell.

There are also a further 37 entrants in the handicap singles.

With the expected announcement of the return of some day tournaments and team league fixtures, the club’s croquet committee is holding back on a decision about doubles competitive play.