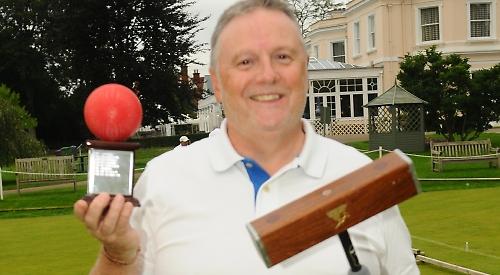 RICK LILLEY secured the first tangible proof that he is the most improved croquet player at Phyllis Court Club in Henley this season when he lifted the 3+ Singles tournament’s Red Ball Trophy on Monday.

Lilley, from Frieth, only picked up a mallet for the first time last season and his winning margin over the experienced Raghu Iyer was the closest possible under the tournament regulations.

The pair tied on six wins from their seven games, also tied with the same net hoops score and could only be separated by their head to head game result, which Lilley won 7-4.

Kevin Ward, who came in as a late replacement on the morning of the event, picked up three wins.

Roberts, Ian Norris, Robin Coates and Patricia Mulcahy have all qualified for the GC All England Handicap National Final at Hamptworth this weekend.

Lilley and Steve Moron play in the C-level Series (7+) National Final at Colchester next weekend, while at the same time, Roger Goldring hopes to make a mark at the top-class English National Singles Championship at Southport.

Elsewhere, Phyllis Court Club’s A side went to Winchester last week and came away with a 6-2 victory in a match which is usually the deciding fixture in the an SCF A-League season.

The win gave members Raouf Allim, Roberts, Goldring and Norris, slight improvements to their national ranking positions but not the league title this season, due to its suspension because of the covid-19.

At Phyllis Court some of the record 57 new members who joined this season took part in a beginner’s event.

Gillian Symons went undefeated in her six games, one win ahead of Liz Smith, and a fortnight ago Hugh Baylis won the first tournament on net hoops after he tied with Mireille O’Brien on game wins.

The two winners, Symons and Baylis, will play-off for the Beginners Singles title on Tuesday.