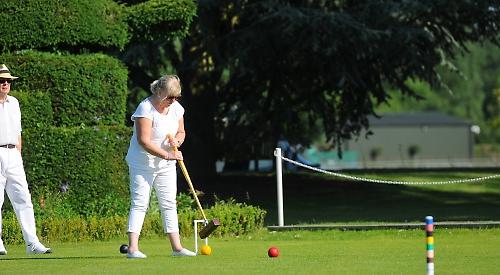 CROQUET players returned to Phyllis Court Club in Henley on Monday as the coronavirus
lockdown restrictions were eased.

The private members’ club has the largest croquet club in the country with 197 members. A strict pre-booking system is in place to control numbers on the greens at any time.

The club has also been taking guidance from the Croquet Association on safe playing during the pandemic.

Starting the playing season nearly four months into the year means that croquet is straight into its competitive programme both internally at Phyllis Court and on the national tournament circuit. As the deadline for entries to the club’s season-long knock-out competitions approaches, entries have smashed all previous records, even without any doubles events for the time being, with almost all members signing up to take part.

Phyllis Court has also introduced a new 10+ competitive level for 2021 to provide a season-long competition and some day tournaments, particularly for the large number of players who started their croquet careers last year.

The first internal 10+ day tournament will take place on April 12 and is already oversubscribed, prompting organisers to search their diaries for a free day to run an overflow event. The same wave of enthusiasm has seen unprecedented numbers of Phyllis Court players entering tournaments away from Henley.

The club has grown used to the likes of Chris Roberts, Roger Goldring, Frances Colman, Helena and Mike Fensome touring the country on the tournament circuit but something is very different this year, with some of the club’s newer players signing up for the National C-Level (7+) Series.

Leading the way are Patricia Mulcahy and Carol Wadsworth, now starting their third year in the sport. They have entered seven Series tournaments as far as Bath and the Ryde on the Isle of Wight. Meanwhile, year-two players Julia Green, Liz Smith and Hugh Baylis who, along with more experienced C-Level Series competitors Tony Peperell, Madeleine Probert and Steve Morton, have entered a number of London and Home Counties-based events.

Phyllis Court will set a record at the Roehampton C-Level in June when the club provide half the field.

With such enthusiasm being shown by the players and up to 35 new players expected to participate in beginners’ training courses after Easter, 2021 promises to be a year of high activity like no other.