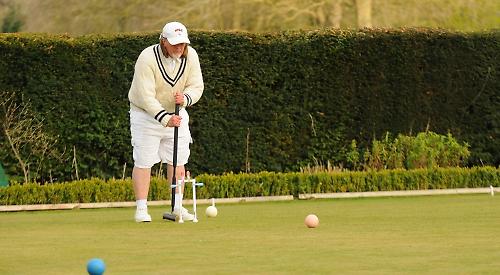 THE Phyllis Court A team cruised to victory against Blewbury A in their first Southern Open League match of the season last week but made harder work of it than the 6.5-1.5 scoreline suggests.

Blewbury should have been no match for the Henley based club with all four of Phyllis Court’s team out ranking their visitors on paper, however, with three of the four opening games all going to 7-6, early notice was given not to take the league’s weakest side lightly.

Chris Roberts led the line for the hosts with a comfortable 7-3, 7-4 victory against David Vincent and number two Roger Goldring recovered well from an initial scare to also win in straight games 7-6, 7-2 against Paul Wolff.

There was interest around the last hoop for the other two rubbers, with Phyllis Court’s Mike Fensome falling to Steve Fisher 7-6 before recovering for a 7-4 second game win in a match that was halted for lunch and eventually agreed to half later in the day when the match result was beyond doubt.

The last match of the morning quartet was the closest of all and Helena Fensome was unlucky to see an attempted long clearance at the final hoop in the first game, hit well at distance but then send opponent John Garnet’s ball through the target at an unlikely angle.

Fensome also lost her second game by the same 7-6 score, which meant Phyllis Court only took a narrow 2.5-1.5 lead into the half time break, and buoyed by this morning success, Blewbury made a real fight of it in the afternoon winning three of the four opening games of the afternoon ‘best of three’ matches.

Ultimately, Phyllis Court did win all four second round rubbers but Goldring was the only Phyllis Court player not to drop a game in the process, as Roberts and the two Fensome’s dropped games that will be personally expensive to their national rankings. On the national tournament scene Phyllis Court players were inconsistent last week at the two-day A-Level (0+) Series event that they co-hosted with High Wycombe CC.

Helena Fensome lost only once in seven games on day one at Phyllis Court to qualify for the leaders block on day two at High Wycombe and was joined by outsider Russell Robinson who won five from seven.

However, the Henley pair bombed on that second day with Fensome’s two wins all that was recorded between them, as Wingrave’s Paul Gunn swept to a second Series victory and a commanding lead in the national competition.

Phyllis Court’s other representatives, Robin Coates, Raghu Iyer, Rick Lilley and Bill Pitkeathle,y fared less well on the opening day but Coates recovered to rule the day two plate block on home turf and was unbeaten right until the last game of the day when he unexpectedly let the consolation trophy slip from his grasp with a 7-2 loss to Charlie Sale, which allowed the Ealing player to win that section on overall net hoops.

Meanwhile, at the Watford C-Level (7+) Series, Phyllis Court’s national tournament debutant Allan Henderson had a good unbeaten morning to qualify for the leader’s block in the second session.

Henderson was right in contention with the leaders thereafter with only two 6-7 reverses pushing him into fourth place overall which earned him two points in the national series competition.

There was good representation from Phyllis Court at this tournament, with Tony Peperell and Steve Morton recovering well from morning disappointments and both Patricia Mulcahy and Christine Searle getting valuable experience at this level prior to further planned outings as the season progresses.