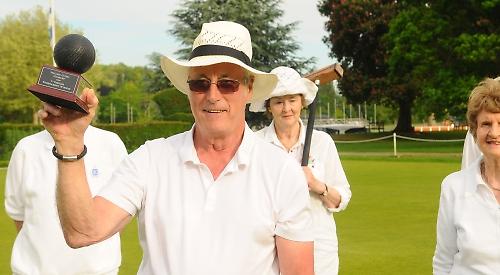 The pair were undefeated until meeting each other in the penultimate round of seven, by which stage they were the only two of the selected eight players in the running.

Henderson’s previous good form deserted him for this crucial head to head and Smith’s cool approach saw him home 7-3.

Going into the last round, Smith still needed to win and had to face Rosemary Noel-Clarke who, despite being the bottom seed, had picked up three wins.

Henderson had to win but also hope that Smith lost in order to force the tournament management to a net hoops calculation but, in the end, both leaders won 7-5.

Patricia Mulcahy turned in another much-improved performance to pick-up three wins and a fourth-place finish on hoop count.

Smith and Henderson both improved their handicaps to seven and they, together with third and fourth placed finishes Noel-Clarke and Mulcahy, all qualify for that national final of the Croquet Association’s Grass Roots competition at Watford CC in September.

Chris Roberts improved on his third place in the national open series at Budleigh Salterton, by taking the runners-up spot in the open at Wrest Park, near Bedford, last weekend. Roberts slipped on the opening day but still qualified for the knock-out phase on day two, where he beat Jayne Stevens in straight game in the quarter finals and had a long three-game semi-final with Tim Russell before reaching the final.

In the final Roberts faced Nick Archer who had been the chief architect of the Henley club’s exit from the National Inter-Club Championship at the hands of Watford the previous weekend. Archer ran out 7-4, 7-5 winners.

Roger Goldring also made the cut at Wrest Park but lost his quarter-final 7-6, 7-6 to Leicester’s David Bell.

In the league Phyllis Court C romped to a third victory of the season with an 11-5 demolition of Caversham A on Wednesday of last week.

Colin Morgan won all four of his games, and there were multiple wins for team mates, Bill Pitkeathley, Henderson and Smith.

The victory for Phyllis Court consolidated their position at the top of the SCF Advantage GC League.

Elsewhere Phyllis Court B turned around a 3-1 half time deficit to salvage a draw against High Wycombe B last Friday.

Rick Lilly won both his matches, whilst captain Raghu Iyer, Dianne Browne and Russell Robinson all contributed one win to their team’s victory tally.