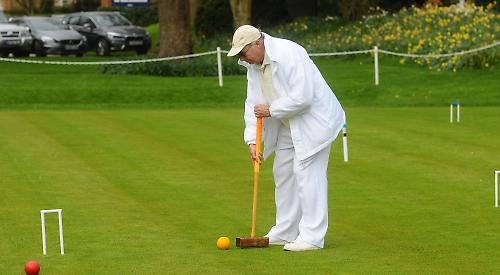 Brian Jamieson was first to finish when he closed Phyllis Court captain Raghu Iyer 26-0 but the remaining three matches all went to the full three-and-a-quarter hours distance to hold the outcome of the fixture in the balance.

At one time Michael Kay was well ahead 23-10 of Richard Peperell who had only just enjoyed a handicap reduction to two for the first time in his career.

Peter Adams had also stretched out a lead but of smaller proportion against Frances Colman in a low scoring11-3 match and the hosts’ only bright spot was Robin Coates 21-15 win against Charles Briggs.

Phyllis Court’s Association Croquet team were back in handicap league action when they entertained the joint team fielded by the Eynsham and Harwell clubs and drew 2-2.

Coates delivered again for the hosts and never looked in trouble against Peter Mansfield despite conceding 10 bisques (extra turns), but the other match rubbers were all close affairs.

Phyllis Court’s Raghu Iyer held a good lead in the number three rubber before Hugh Manson found his touch and sailed past the Henley player’s score while Frances Colman was again on the sharp end of another low scoring battle, losing to David Spicer, 10-8.

Last to finish was the number one rubber between Chris Roberts, who had reduced his handicap back to -0.5 at Tyneside two weeks ago, and the fast-improving Peter Allan, who had had a handicap cut to 2.5 within the last month. Allan capitalised on a slack shot from Roberts that hit the centre page to lay invitingly in the centre of the court to hand the Eynsham/Harwell player a break that yielded eight hoops, after which the grateful visitor kept Roberts a bay with good use of his three bisques.

Roberts came back into it in the last half an hour and was seemingly on the way to a match wining break only to flounder at hoop tw and, in a tense last 10 minutes, fortunes switched to and fro and the disastrously for Allen when he bounced off hoop six with less than a minute to go.

Roberts hit-in as time was called and then tied the game by scoring hoop six himself, and with the huge advantage of the break, cleared the court of danger before positioning with precision in front of the deciding hoop which he converted for a one hoop win which secured Phyllis Court a 2-2 draw.

As competitive association croquet kept its golf croquet sibling in the shade at Phyllis Court this week, the club set a record for the number of visiting players from one club attending a national series tournament when eight members entered the
C-Level (7+) tournament at Roehampton.

Steve Morton fared best and was undefeated in the morning block games and continued in the same vein to beat Jeanette Burn 7-4 in the quarter finals, before losing his semi to Andrew Jackson.

He eventually had to settle for fourth place when he lost a play-off to Mark Green, but a useful two points in the national series was a good result for the Phyllis Court man.