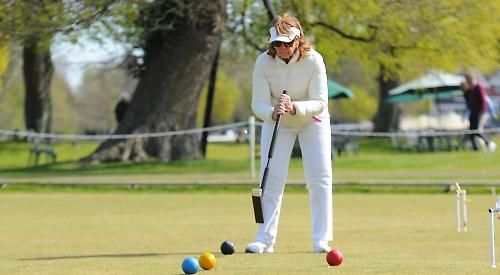 PHYLLIS COURT D won twice in a week in a remarkable turnaround in fortunes to rescue a dismal season that had started with three defeats.

Both victories were on the road with the first being an 11-5 demolition of Blewbury C in their fourth SCF Advantage GC League fixture.

Star of the day was team debutant Andy Jones who, despite only starting his croquet career in April, joined the side as a late replacement, and recorded three wins in his four games.

Jones opened his account with an impressive 7-2 score line against former Phyllis Court member Edmund Shirley and then coped well with the pressure of three successive games going to a deciding 13th hoop.

Phyllis Court’s Gillian Symonds also went to a 13th hoop three times on her way to recording three wins, a feat matched by teammate Carol Wadsworth, while the Henley club’s second debutant Phil Johnson won twice to end with an even score. With nine of the 16 games in the match ending 7-6 or 6-7, it is was an encouraging statistic for this new way of playing handicap croquet, currently undergoing the World Croquet Federation trial in croquet’s Southern Region.

Phyllis Court D then romped to a second victory, 10-6, at High Wycombe Kites on Monday. In the first round, honours were shared at two wins apiece with Phyllis Court’s Symons and Wadsworth the first visitors to get on the scoreboard.

Patricia Mulcahy came back into the side and was undone by the experience of High Wycombe’s Keith Toovy but after that didn’t put a foot wrong and recorded a hat-trick of three victories.

Phyllis Court went 5-3 up in round two, maintained that margin in the round three and then sealed the fixture with another triple win in the last round where players compete head to head with their opposite numbers.

This last round was the most telling with Phyllis Court’s high handicappers polishing off their hosts in quick time with the assistance of the Advantage GC handicap scoring system.

Symons and Mulcahy ended on three wins, while Wadsworth and Hugh Baylis contributed another solid two.

In national C-level series, although contributing half the field at the Roehampton tournament a fortnight ago, Phyllis Court had not troubled the scorers, but last week they were very much to the fore at the Ealing event.

High Wycombe’s Catherine Shore won the event but was pushed all the way by Phyllis Court trio Don Rutherford, Patricia Mulcahy and Allan Henderson who took the podium places and all earned valuable series points that accumulate towards qualification for an end of season national final.

Back at Phyllis Court, the recent addition of evening mini-tournaments for beginners to cut their competitive teeth has resulted in victories for Henry Sless and Ruth Raunkiaer, and a yet to be resolve final between Stuart Drew and John Merkle.

Buoyed by the success of this initiative, which aims principally for greater integration within the club, Phyllis Court have now expanded this to existing members with handicaps of 10 plus.