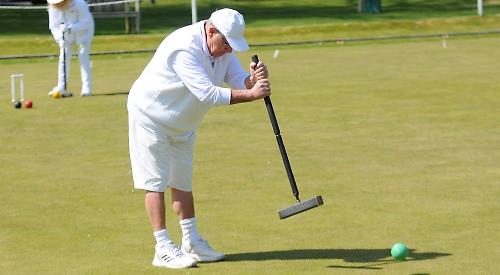 ROGER GOLDRING showed powers of recovery when he won the annual open singles tournament at Phyllis Court Club in Henley for the first time last week.

He took full advantage of an extended two-phase tournament format that allowed him to recover from an untypical lacklustre start.

The six-player field began by contesting an “all play all” block stage which would decide which four players would qualify for
semi-finals and final.

At lunch, Goldring was the only player not to have won a single game but after the break he turned in a first win when he beat Helena Fensome before defeating top seed Chris Roberts.

This concluded the block stage, with Roberts and Goldring tied on two game wins for the crucial fourth qualification spot. Thanks to those narrow morning defeats, Goldring went through finals on net points.

Goldring continued his change of fortunes with another win over Fensome, whilst on the other court Ian Norris had beat Mike Fensome.

In the final, Goldring took the lead and fought off a rearguard fightback from Norris to get home on the 12th hoop and was presented with the Blue Ball.

At the end of the first day at Phyllis Court, Blewbury members Bruce Gallop and Steve Fisher headed the field, undefeated in two and a half games. Colman had won and lost in the first two rounds but Coates and Iyer were winless. Gallop continued his good form at the resumption of play on day two that had switched venue to Blewbury.

He went on to win his suspended top of the leader board battle with Fisher, and both Coates and Iyer got on the scoreboard with third round victories before then facing each other in round four.

This Phyllis Court rivalry was just the spur Iyer needed to defeat Coates +12. Colman also doubled her victory count with a +9 win over High Wycombe’s Robin Morrison, meaning all three Phyllis Court players were in with a shout of the tournament title if last round results went their way.

At the halfway stage, the Phyllis Court trio, all on two wins, all held in-game leads over players whom they trailed by one win, resulting in prospect of the manager having to separate a potential six-player tie.

Although Colman beat Fisher and Coates beat Gallop, meaning that all four ended on three wins, Iyer couldn’t match Hurlingham’s Hewitt and his victory over the Phyllis Court man gave him a fourth win, and with it the trophy.

Second place was decided on “quality of wins” and this went to Gallop, just ahead of Colman, Fisher and Coates in that order.

First she won all three of her matches as Caversham B beat Dogmersfield 4-1 in the Southern Croquet Federation’s Single Court Handicap League. In doing so Anne improved her handicap to eight and led her side to the top of the league.

Then she beat all four of her opponents as Caversham A clinched a narrow 9-7 win over Wingrave in their Advantage League clash at Blewbury.