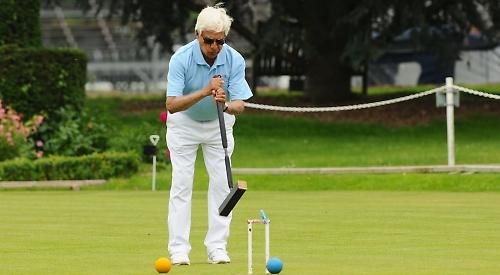 The hosts, who had to concede handicap extra turns in every rubber of the fixture, got off to a good start with a comfortable 7-4, 7-5 victory recorded by Roger Goldring (handicap -1) and Raghu Iyer (3) in the morning doubles match.

This gave Phyllis Court a slim 2-1 half-time lead but with all to play for in the four afternoon head-to head singles rubbers.

Iyer extended that lead with a 7-4, 7-5 defeat of Durham’s Dave Parsons (4) with an assured performance.

Durham came quickly back into the match when Phyllis Court’s Coates, the All England Handicap Champion, struggled to deal the four well used extra turns of Roger Carpenter (3) and the Durham man won comfortably 4-7, 4-7.

In the number twos head-to-had match, Norris had the difficult task of trying to contain McCann three handicaper and, although the Phyllis Court man pulled of hard won 7-6 first game score line, McCann won the next two 5-7, 3-7.

This tied the team match at 3-3 with just the Goldring versus Tymms match to complete, with Goldring having done well to recover from a 4-7 first game loss, to win the second 7-5.

There was a good contest at hoop five where Tymms eventually nestled in the hoop jaws which forced Goldring into a “do or die” jump shot which he nailed perfectly, and by time repeated the act at the very next hoop all the other players were looking on attentively.

The next four hoops were traded evenly until the pivotal 11th hoop, where Tymms decided to play his remaining extra turn to attempt an awkward clearence stroke.

Referee and competition director Frances Colman was called to judge the stroke which saw Tymms clip a close-by second ball with his backswing.

With that fault, the impetus of the match swung fully in Goldring’s favour, as he ran hoop 11 well for 6-5 and in doing so, took a commanding position at hoop 12 leaving Tymms it all to do to save the game and overall team match.

Goldring then sealed the matter 7-5 after two full stroke rotations.

Phyllis Court moved into the quarter-finals of this national competition and will play Essex club Maldon, again home, on Tuesday July 29.

• CAVERSHAM LADIES A were once again the stand-out players in a 10-6 victory at Blewbury D on Monday which lifted them into second place in the Southern Croquet Federation’s Advantage League North. Anne Small won all four of her matches and Liz Walker picked up three wins.