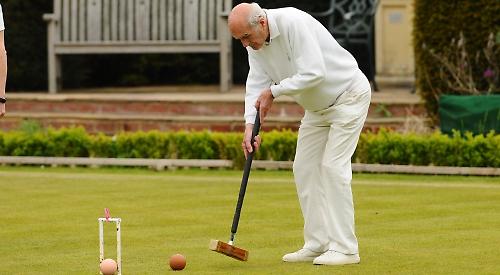 Goldring got a game off the impressive Nick Archer in their best of three final to cap a fine two-day performance that was his best this season.

It could have been an all-Phyllis Court final but for Chris Roberts’ error against Archer in their semi-final when, having come from behind in their deciding game of three, Roberts took a first stroke advantage to the crucial last hoop, where good positioning meant he had a routine clearance to anywhere on the island, but instead contrived to send his opponent into the jaws of the deciding hoop.

Roberts re-composed to defeat Ian Shore of High Wycombe for third place but plaudits went to Goldring whose solid and assured performance moved him back into the UK top 60.

Phyllis Court D made it three wins on the trot at Harwell in the SCF Advantage GC (handicap) League.

Captain Patricia Mulcahy and Carol Wadsworth each bagged three game wins and were ably assisted by Andy Jones and Phil Johnson with one and two wins respectively. Mulcahy brought her handicap down to 10 for the first time.

Phyllis Court C maintained their unbeaten record as they cruised to a fourth league win, 10-6 away at High Wycombe Kites.

The visitors got off to a flying start with three wins out of four in the first round for Colin Morgan, Michael Christmas and Kevin Ward, and the latter two doubled their accounts in round two to give Phyllis Court C a 5-3 half-time lead.

Captain Bill Pitkeathly won twice in the afternoon as did Morgan whose handicap was reduced to five a fortnight ago. Ward added another win giving him three for the day.

Phyllis Court B are still awaiting their first win of the season following this a 6-2 defeat at Blewbury last week in the SCF B-Level (3+) League.

All eight of the matches were high-scoring close affairs with six going to a deciding third game.

Russell Robinson recorded Phyllis Court’s only win of the morning session when he beat David Grinstead 7-6.

Phyllis Court’s Association Croquet team went down to a 4-2 friendly defeat at the Hurlingham Club in Friday.

The morning doubles matches were shared one a piece with a win for Richard Peperell and captain Raghu Iyer, but defeat for Chris Roberts and Frances Colman.

Roberts made-up for his error strewn morning display by scoring the visitor’s only singles win in the afternoon.

With the last pay of his game, he hit in well, positioned badly at the penultimate hoop, but then ran it from a most improbable angle, pegging-out to win by one point.