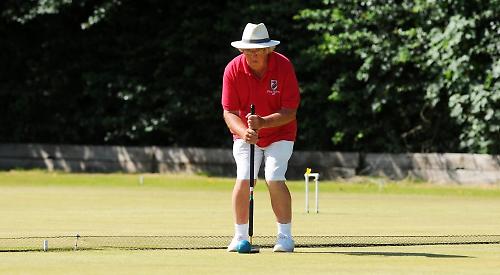 Roberts’ long rage shooting was his best ever and he cleared Mulliner’s fine positioning shots time after time from 20-plus yards in a match that saw lengthy contests at every hoop.

Mulliner was forced to change tactic to avoid the bombardment which a compliment to the Henley player who was unfortunate to lose the first game 7-5 when a ricochet left him behind a rouge hoop and he had to surrender a mid-point 5-4 lead to give the initiative to his opponent.

In the second game, Mulliner used all his 30-plus years top class experience to keep Roberts at distance and when finally presented with two touching balls, played a two-ball roll-shot to perfection to a foot in front of a distant target hoop with Roberts’ ball in a hidden position behind.

More long rage hits ensured that game went to the 11th hoop before Mulliner wrapped up the match 7-5 again.

This capped a good weekend for Roberts who, despite beating England international Steve Leonard early on, then had to recover from two unexpected opening day losses that saw him only just make the cut for the second day main knock-out.

Roberts dispatched England captain Stuart Smith 7-5, 7-4 in the quarter-finals and then Richard Brooks 7-5, 7-5 in the semi-final. Roberts is now ranked number 23 in the UK.

Phyllis Court A were too good for visitor’s Ryde from the Isle of Wight as they ran out 6.5-1.5 winners.

The writing was on the wall from the start for the islanders who fell to three straight game wins to Roberts and Norris and Robin Coates who was making a return to first team action.

Only Ryde’s number one player Jonathan Smith, the former Davis Cup tennis player, could live with the pace set by the hosts and he managed to keep Ryde’s hopes alive in a topsy-turvy match with Roger Goldring who won their first game 7-0 but then lost the second 7-1.

Goldring and Smith played an extraordinarily long deciding game which Smith eventually won 7-6 to make the team match score 3-1 to Phyllis Court at that half-way point.

However, that was it for Ryde after lunch and it was more of the same, albeit with closer games, but the same results as the morning with three more starting game wins for Roberts, Norris and Coates.

The team match was halted with the Goldring versus Roy Tillcock afternoon rubber at 1-1, in favour of Ryde not missing their ferry home as the result left Phyllis Court to the top of the SCF Open League.

Frances Colman was the best performer of the Phyllis Court trio that took on visitors from four other clubs in the annual 8+ Advanced Association Croquet tournament jointly hosted by High Wycombe CC.

• THE Caversham B pairing of Anne Small and Carol Jamieson consolidated their position at the top of the One Court Clubs Handicap League with a 3-2 win at Aldermaston on Friday. However, they can still be pipped to the League title by Caversham C.