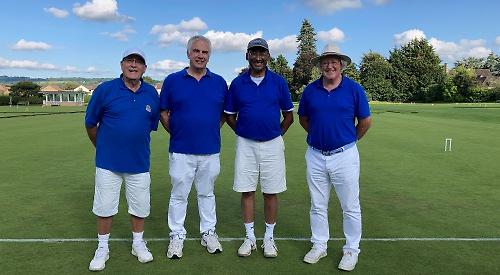 PHYLLIS COURT C team are celebrating a hard-earned Southern Croquet Federation Advantage League North Division title which they secured on Monday in their last match of the season.

The 10-6 defeat of High Wycombe Kestrels was not as comfortable as the score line suggests and the result had been in the balance going into the final round of four.

Against the background of a stuttering latter half of the season for the C team, in which they had failed to secure the division title in their previous two fixtures, this match against the mid-table Kestrels had the air of the “last chance saloon” about it.

A 7-9 defeat to Blewbury C six days earlier had been unexpected and the confidence that had resulted from a string of undefeated matches in the first half of the season was but a memory going into this crucial match.

The topsy-turvy nature of their season was again played out, with the Kestrels taking a 1-3 lead in the first round, being pegged back to 4-4 in the second, before the C nosed 7-5 in front going into the last round.

Kestrels newcomer Pat Winning won all three of her games and looked to be the pre-game favourite against David Young, but the Phyllis Court man played the game of the day to give the Henley side one of the remaining two wins needed for victory.

Moments later Michael Christmas got that second win and, with the division title secured, Jeff Smith gained a fine win over the visitor’s captain Kay Vickery.

There was further success for Phyllis Courts Chris Roberts and Roger Goldring last weekend when they helped steer Oxfordshire to promotion in the Inter-Counties Championship second division at Cheltenham.

Together with former Phyllis Court member Raouf Allim and Scotland international Stephen Wright, both from the High Wycombe club, they finished on equal match wins and equal game wins with Hertfordshire, but lost the Division 2 title on the head on head result between the two teams.

Their only other loss had been to a CA Select team who fielded
18-year-old New Zealand age grade international Ellie Ross and
15-year old UK B-level champion Jack Good, displaying the success of croquet’s youth drive.

Oxfordshire defeated Devon, Buckinghamshire, Leicestershire, Gloucestershire and Berkshire, with the latter featuring another Phyllis Court player Richard Peperell, who claimed doubles victory over Roberts and Allim which turned out to be one of the defeats that robbed their side of the second division title.

The runners-up spot was good enough for Oxfordshire’s promotion to Division 1 for next season as Phyllis Court member Frances Column representing the President of the Croquet Association, presented the winner’s shield to Hertfordshire.

Back at Phyllis Court, D team captain Patricia Mulcahy reached her first internal final with a hard-fought 7-5, 7-6 win against Mike Sayer on Monday evening in the 10+ singles competition.

Mulcahy awaits the outcome of the other semi-final between Gillian Symons and Jim Walter.