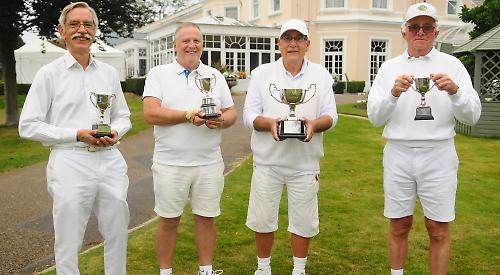 ROGER GOLDRING became the Phyllis Court GC Champion for the first time when his season-long Open Singles competition climaxed in a thrilling cliffhanger ending at the last hoop.

This came shortly after the hotly contested curtain-raiser match in the final of the second tier 3+ competition that was won by Rick Lilley.

Indeed, such was the closeness of both contests, the assembled crowd showed their appreciation for the losers, Ian Norris and Russell Robinson respectively.

The designated Finals Day at Phyllis Court last Saturday started with the final of the fourth tier 10+ competition between Gillian Symons and Patricia Mulcahy.

Both enjoyed success representing the Phyllis Court D team this season and Mulcahy has competed on the national C-Level 7+ Series circuit this season, culminating in qualification for the National Final tournament on the Isle of Wight.

But in this final it was Symons who eventually established the upper hand and included a comeback from four hoops behind to win 7-5, 7-5 and become the inaugural victor of this competition.

The morning was completed by the consolation plate event at the 10+ level where Sally Batty won a topsy-turvy final against Carl Billson 7-5, 3-7, 7-2.

After lunch, Russell Robinson took an early command of the 3+ singles final, winning the first game of three 4-7 as Rick Lilley struggled to find his shooting accuracy. Nerves clearly affected both players in a mistake-ridden second game which Lilley rescued to win 7-6.

On the final game, he took a 5-6 lead with a good position for a potential match-winning hoop 12.

But Lilley then played the shot of the match from some distance to block Robinson’s hoop attempt and stayed in the match before getting very lucky when a missed clearance attempt glanced off the hoop leg and found its intended target by the most fortunate of routes and had Robinson on the defensive.

Robinson was then faulted by referee Helena Fensome as he tried to block the hoop from the rear and Lilley scored to take the game, match and title to the 13th and deciding hoop.

Robinson had the advantage with the first stoke but was overcautious and took a very deep position that was then replaced by the next two stokes.

Meanwhile, in the Club Championship, Ian Norris’s first game
5-7 win was answered by Goldring
7-4 in the second.

Norris took a commanding 4-6 lead in the third but Goldring capitalised on a miss to get back to 5-6.

Goldring then stayed in the match with the most difficult of clearances to eventually win hoop 12 to tie the match at 6-6.

After much to and fro, Goldring earned a good advantage, settled, shot for the win, and with much relief, saw his nervous attempt rattle both hoop legs before settling to claim the score.