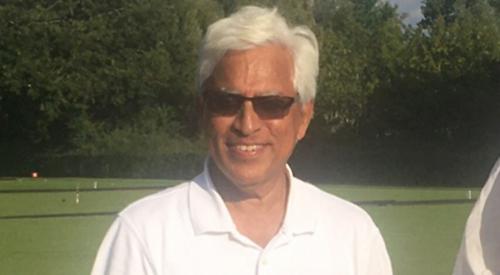 The Ark is played to advanced handicap rules which adds an extra dimension to regular handicap play, with the additional “lift” options coming into play.

Iyer was undefeated in all five of his games over the weekend, finishing well ahead of 23 rival competitors. This saw him have his handicap reduced to 11.

Coates beat Richard Peperell +26, Chris Roberts +25, Raghu Iyer +20 and his closest win was against Frances Colman +3, and he adds his name to one of the club’s oldest trophies that has seen annual competition since 1969. Coates reduced his AC handicap to a new personal low mark of 11.

The fast courts meant ball control was far from easy and the Colman and Roberts combination led the field in the handicap doubles event for a while before falling away in the last round.

The pair also enjoyed initial successes in the singles event too but it was Peperell who achieved most when he took the repechage route to the main event semi-finals before losing to the eventual winner Charles Ostler from Lincolnshire.

Meanwhile, most of the Phyllis Court Golf Croquet (GC) competitions had been settled the previous weekend at the Henley club’s finals day but due to Patricia Mulcahy qualifying for a second final, the GC handicap singles final was put back a few days.

Mulcahy capped a fine season of improvement when she wrapped up that title with a win against low-handicapped Ian Norris.

Using all her experience gained from appearances in two successive All England handicap national finals, Mulcahy swept to victory 7-3, 7-4.

The final of the7+ singles consolation plate saw Gillian Symons come from behind to defeat Phil Johnson 4-7, 7-4, 7-5.