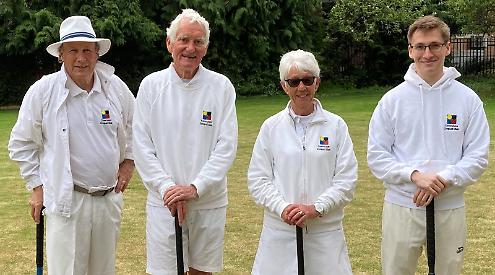 CAVERSHAM fought back from behind twice to snatch a 2-2 draw with Oxford University in their opening SCF AC fixture of the season in the Parks on Sunday.

Late substitute Carol Jamieson — replacing an unwell team-mate — won her match and then Charles Briggs snatched a single-point victory after ‘time’ had been called.

On Thursday croquet history was made when a match in the GC One Court League, playing to the Advantage format, went to a third extra hoop.

Pam Briggs eventually prevailed over Anne Small at the 15th hoop. But it was only consolation for Caversham C’s Briggs and her partner Jane Probitts as they went down 4-1 to the Caversham B pairing of Anne and Carol Jamieson.

Caversham’s Charity One-Ball champion Gareth Hobby won five of his six matches in the tournament’s national final at Surbiton but lost to the eventual overall winner, James Galpin, of Nailsea.

Tomorrow (Saturday) Caversham will be staging an Open Day at their Albert Road lawn (1pm to 4pm) when prospective new members will be welcome.