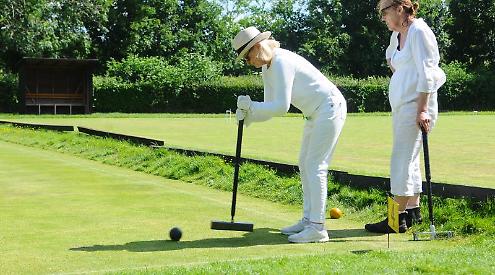 PHYLLIS Court’s Patricia Mulcahy sprang a huge surprise last weekend with a string of wins at the Women’s Open Championship despite entering the top draw tournament as the outsider.

Mulcahy (handicap eight) gave early notice that she wasn’t there just to make up the numbers when she scored a narrow 7-6 first game win against the experienced third seed Andrea Huxley (one) and then bounced back from a 7-3 reverse to take the match 7-4 in the deciding game.

Despite a straight-games set-back against Cheam’s Beryl Hughes (three) in her second match, Mulcahy defeated Naomi Whitehead (seven) from Cheltenham 7-4, 7-6 in her third.

Mulcahy played-out another long three games for a futther against the odds victory, this time against Oxford University’s Sophie McGlen (two) 7-5, 2-7, 7-6. The second day of the three-day championship saw Mulcahy’s tide turned and successive last hoop victories all went against her as she lost in three games to Ann Brookes (two), Jane Pringle (two) and Liz Farrow (-1).

Mulcahy missed the cut to the main event knock-out by one place and entered the plate event on day thre where she won a further two games to round off a terrific performance. She earned a handicap reduction and 150 rise in the UK/World rankings.

Elsewhere in the last week, Julia Green and Steve Morton did well to qualify for the knock-out stage of the C-Level (7+) Series tournament at Roehampton, a first-time achievement for both and Chris Roberts waved a creditable flag for Phyllis Court with a 50 per cent record against a tough field in the Blewbury AC midweek.

On the teams front, it was a mixed week for Phyllis Court, who lost 5-2 at Watford on Monday in the National second tier Inter-Club Murphy Shield competition, where Dianne Browne recorded both her side’s victories.

It was a similar tale two days later, when much the same line-up lost as Phyllis Court B away to High Wycombe B by 2,5 to 5.5 in the Southern Federation B League.

Between these two ties, Phyllis Court’s Association Croquet team scored a 2-0 part-victory in their handicap league match with Caversham thanks to good performances from Raghu Iyer and Roger Goldring, and the remaining two rubbers were postponed to a later date.

• ANNE and Tim Small both won all four of their games as Caversham thrashed Winchester 12-4 in their first match of the season in the GC Advantage League on Friday of last week.

Charles Briggs and Carol Jamieson progressed from the Caversham qualifying heat of the GC All-England Championship on Sunday and will play in the regional final at Phyllis Court on August 10.