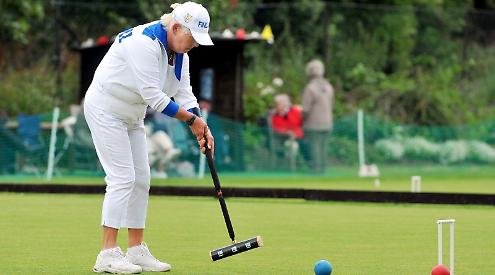 PHYLLIS COURT duo Chris Roberts and Helena Fensome will be competing in the Golf Croquet World Championships that starts today (Friday) at Southwick near Brighton.

They will be joined by clubmate and championship referee Frances Colman who will be officiating at another top-drawer event this season.

Fensome is a veteran of two previous World Championships in England and Egypt, thanks to her native Finland representation, and when playing away from Phyllis Court, she competes under her Finish name Helena Jansson.

Roberts had to win through a qualifying tournament in order to win a place at the last world championships in 2019, but this time he has been selected as the Wales representative and like Jansson has an automatic entry.

The opening ceremony is today with play starting tomorrow (Saturday) and culminating in the final on August 7. The whole tournament is being live-streamed on YouTube.

In the last week Phyllis Court hosted two national two-day tournaments in conjunction with co-hosting neighbouring clubs and both featured home players. Raghu Iyer flew a lone flag for Phyllis Court at an Association Croquet 8+ Advanced tournament which was dominated by Robin Morrison of High Wycombe.

Iver was joined by clubmates Dianne Browne, Andy Jones and Patricia Mulcahy, the latter pair stepping up to this level for the first time.

Browne took the plaudits on Saturday by winning the block staged at Phyllis Court but, as she had only come in as a late replacement for a covid-hit player, she withdrew from Sunday’s play on prior arrangement.

Mulcahy did well as the lowest ranked player in the field and got off to a cracking start in winning her first two games, including the scalp of the top seed and eventual overall winner Peter Adams, formerly of Caversham, but now playing at Guildford.

At Sunday’s plate event held at Phyllis Court, Andy Browne came in for the retired Browne and the event but for a poor stroke choice at hoop 10 in his last game, leading to a loss and eventual third-place position decided on net hoops between the top three tied on game wins.

Mulcahy continued to impress and finished the Plate in fourth, just one game win behind that trio, which will have given her great confidence as she headed west to Bath for yet another in a string of C-Level Series tournaments this season.

• CAVERSHAM clinched the SCF One Court Clubs’ Advantage League with a 5-0 whitewash of Aldermaston on Thursday of last week.

The B team pairing of Tim Small and David Dibben made sure the club retained the trophy for the fifth year in a row.

Sharing the playing duties over the GC season with Anne Small and Carol Jamieson, Small and Dibben completed a 100 per cent winning record for the team.