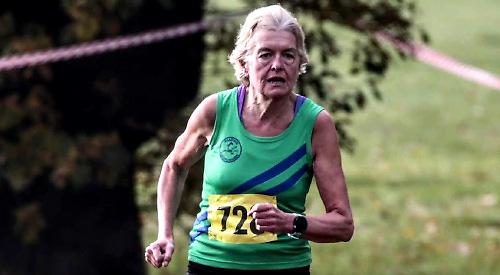 The retired modern languages teacher ran in the British and Irish Masters cross-country international at Aintree on Saturday, helping England to victory.

And after a near 400-miles round trip she raced again less than 24 hours later, this time helping her club Reading Roadrunners to a victory in the Berks, Bucks and Oxon XC championships.

Davies finished third in the women’s V60 age category on the famous Merseyside racecourse, running 25 minutes, 53 seconds for the 6k distance. England beat Ireland and Scotland to win that age group and won the international convincingly.

“It was a great race,” said Davies. “It was not the most exciting of courses but it was flat and fast.

“There were perfect conditions, dry and cool, and a lovely setting at the racecourse, with very few tall horses knocking about.”

After the long drive back to Goring, Davies was up bright and early next morning for the BBO championships at Prospect Park in Reading.

There she finished 12th in the vets’ race in 23 minutes, 53 seconds as her Roadrunners team-mates Mel Shaw, Helen Pool and Sarah Dooley retained the three-counties’ shield.

Davies will be taking a deserved rest from racing next weekend and celebrating her 61st birthday with family.

Then it’s back to business, with the SEAA Masters cross country championships in Oxford the following weekend. Her targets next year include the London Marathon in April followed by the 100km Race to the Stones in July.