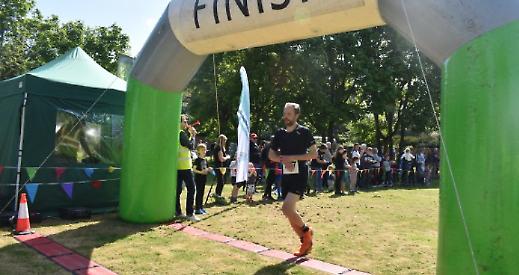 A RUNNER from Henley won the Nettlebed Stinger race for the second year in a row.

He was one of 210 runners who took part in Sunday’s event, which was established last year by the Friends of Nettlebed School to raise money for playground improvements, which are expected to cost £20,000.

The runners assembled in the walled garden at the school off High Street, where a fitness instructor led them through a warm-up routine.

They then walked to the nearby Nettlebed Creamery where organiser Phil Lloyd started the race.

The course followed mostly footpaths and bridleways to the south-west of the village, including numerous hills designed to challenge the runners.

The competitors ran through woods, across open fields skirting Highmoor and Witheridge Hill before joining a stretch of road. They then ran uphill to English Farm before following a footpath back towards Nettlebed for a sprint finish.

Pupils and families and friends of the runners waited for them in the walled garden and cheered as they crossed the finish line.

Mr Price, an IT professional, who lives in Wootton Road, said: “I’m so glad I took part for the second year. It was really good fun and very well marshalled. They had running jokes along the course to read, which I thought was brilliant. It’s great to support the local school and it’s a very friendly event and the course is very beautiful.”

He was one minute and 23 seconds slower this year despite the weather being better than last year’s slippery conditions.

Mr Price said: “I’m going to have to come back and try to win it next year as well.”

The runner-up was Ben Paviour, from Sonning Common, who finished the race in just over 38 minutes.

The 49-year-old, who came third last year, said: “It’s a great local event and the course is beautiful and very varied with lots of up and downs. It’s all for a very good cause and I really recommend it to anyone wanting to try it, you won’t regret it.”

Wayne Wood, of Benson Striders, came third in a time of 40 minutes and 27 seconds. The first woman home was Nicola Taylor, of Run Henley, who completed the race in 43 minutes and 29 seconds.

Inside the walled garden there were stalls selling cakes and books to raise money for the school, a coffee cart and a bacon sandwiches stall.

The event was sponsored by the creamery, which offered free parking, and the F45 gym in Henley.

There were also two junior runs held before the main race, a “little stinger” dash of about 200m within the walled garden for children under six and a 2km “stinger cubs” run for children aged four to 15.

Mr Lloyd said: “It was a very warm day and Richard’s time was very impressive.

“I was standing at the finish line and looked around and the amount of smiling faces was remarkable. I think the weather helped. We had more people and children taking part this year, too. It was a reminder of the great community spirit that we have got in the village and at the school in
particular.

“It felt like a really lovely event and all of our sponsors, who are local businesses, were fantastic at supporting us.”