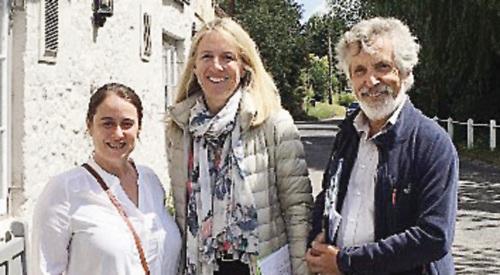 CUXHAM has been visited by judges from the Britain in Bloom competition.

The village is entered in the small village category of the awards for the Thames and Chilterns region.

The judges were Victoria Newton, a
co-ordinator of the Chelsea Fringe Henley festival and a volunteer at Greys Court and the Garden Museum in Lambeth, and Pete Thompson, who is the regional vice-chairman.

They were given an hour-long tour which began at the Half Moon pub, where they were shown planting outside by owner Vaska Battley.

They visited Cuxham wildflower meadow, which has a low-nutrient soil, resulting in unusual and specialised grasses and flowers.

Insects and reptiles thrive in the long grass and nectar and pollen in the wildflowers attract bees and butterflies, which in turn encourage birds and bats.

To prevent the soil becoming enriched, the grass is scythed and raked in high summer with help from conservation groups. This year Oxford Conservation Volunteers are helping with the work.

The field has been renamed Town Furlong after the discovery of an estates map which showed its historical name.

The competition winners will be announced at an awards ceremony in Amersham on September 28.