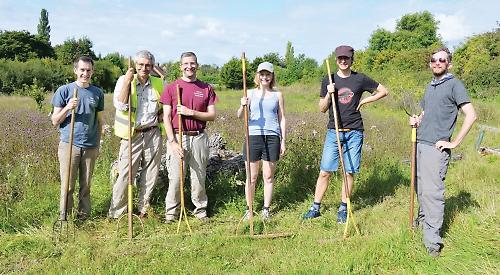 A TEAM of volunteers cut back a wildflower meadow in Cuxham to encourage it to grow.

The eight members of the Oxford Conservation Volunteers used scythes to carry out the work on the land, which is off the B480.

Phil Hunter, a member of the team, said: “The local residents are trying to develop a wildflower meadow and they are in the early stages. We cut it by hand with Austrian scythes, which is the traditional way of doing it. We mowed the bottom half of the meadow and then we raked off all the cuttings to make sure the new growth comes through next season.”

Mr Hunter said the traditional method of maintaining the meadow was better than using fertilisers.

“The more fertiliser there is on the meadow the easier it is for the coarse grasses and other plants you don't want to grow,” he said. “Ideally, you want chalk grassland grazed by sheep as they usually take all the coarse stuff like scrub and hawthorns.

“In the Chilterns you have got chalk geography which, if it hasn’t been fertilised, is the ideal habitat for wildflowers and the insects that rely on them. The idea is to create the conditions that favour wildflowers. If you do that consistently over a number of years then eventually they’ll take hold and at spring time it should be a very pretty place to be.”

The Half Moon pub in Cuxham served pizza to the volunteers, who plan to return to the meadow in a year’s time to repeat the process.

To volunteer or for more information, visit www.ocv.org.uk