Bypass to mitigate effect of 3,000 homes at airfield 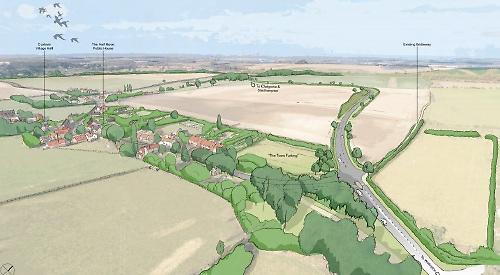 PLANS for a bypass around Cuxham have been revealed.

Homes England, a government agency, wants to build 3,000 homes at Chalgrove Airfield and says the new road would help mitigate the effect of the extra traffic generated by the development.

It considered four possible options for the route to the north of Cuxham and the B480 but is recommending that the road cuts through fields on the edge of the village.

The agency says this would be an attractive alternative route that would reduce traffic passing through the village and improve the environment in terms of air quality and noise.

It considered a route to the south of the village but discounted it, saying it would be less beneficial as many drivers would still pass through the village and Manor Farm Road was unsuitable for use as part of the B480 route.

In a statement, Homes England said: “At this stage it was considered that a northern bypass would be preferable as this would be most effective in addressing existing traffic flows through the village and mitigating any future increase in traffic movements.”

The agency says it carried out a survey that showed an average of about 350 vehicles per hour went through Cuxham one way or the other during the morning and evening rush hours. This would increase to almost 500 an hour by the year 2034 even without the airfield development and to about 750 in a “worst case scenario” if the homes were built.

The statement adds: “Cuxham village is sensitive to traffic flows due to narrow roads, limited and sometimes unavailable footpaths and properties directly abutting the road. This means that the level of traffic flow needs to be addressed and therefore doing nothing is not an option.”

Homes England is expected to submit an outline planning application for the airfield in the summer followed by plans for the Cuxham bypass. The agency also wants to build new bypasses at Stadhampton and Chiselhampton.

The plans were put on public display at Cuxham village hall earlier this month. Ian Goldsmith, chairman of Cuxham with Easington Parish Meeting, said: “We are principally opposed to Chalgrove as a development site.

“We think there are far more sustainable locations which have also been in the South Oxfordshire District Council local plan.

“At the same time we have been engaging with Homes England because should it go ahead there would be more than a doubling in traffic.

“There’s only a single road through Cuxham and many homes are 16th and 17th century. Increased traffic is a risk to the homes, so we have been engaging them in order to achieve some mitigation.

“Whatever route does come through it is a major scheme and it’s going to cause some form of landscape harm.”