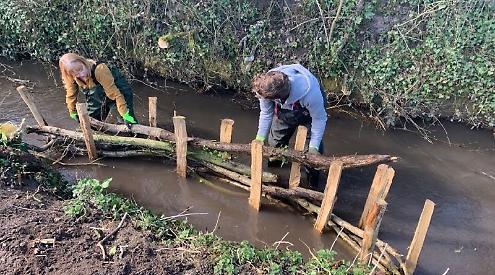 VOLUNTEERS have given wild trout a helping hand by boosting the biodiversity of a Chilterns chalk stream.

They carried out work in Chalgrove brook in Cuxham to improve the habitat of fish, invertebrates and aquatic plants.

The work was carried out by the River Thame Conservation Trust with the help of local groups and was led by Chelsea Hothem and Andrew Morsley.

The volunteers bashed stakes into the stream’s gravel bed and moved logs, branches and brash to build berms and deflectors, which are designed to help fish thrive.

Some volunteers worked on the banks sorting woody material to be used in the berms and removed branches in shaded areas to let more light into the brook. They also collected litter. Ms Hothem said young trout needed slower-flowing refuges with ample hiding places to avoid predators, while adult trout preferred to preserve their energy and often establish feeding territories in areas of slow current next to a fast current that carries their insect food to them.

The berms and deflectors built by the volunteers are designed to narrow the wide, shallow, slow-flowing stretches of the brook in order to improve diversity. As well as providing hiding places for trout, they speed up the water and scour sediment off the gravel bed.

Ms Hothem said: “The main issue with our chalk streams is that they have been redirected and straightened and have become homogenous and thick with sediment at the bottom. We know that brown trout populate the stream but we don’t have any record of them in this stretch so we are hoping that these works will help them come back.

“It was great to have the community come out and get their hands dirty and we had fantastic weather, which always makes for happy volunteers.

“So many of them understood the importance of chalk streams and how under pressure they are.

“It was good to have them physically working in the stream, building different structures.

“So many volunteers told me they had memories of playing in very similar chalk streams as children — the brook means a lot to them.”

In the autumn, 10 berms and 12 deflectors were built in the brook with the help of volunteers and funding from the Environment Agency and South Oxfordshire District Council. Nearly 200 metres of brook were improved and it’s hoped to repeat this on another 200m stretch.

He said: “Thank you to the trust for organising the brilliant volunteer day near Cuxham.”

Cllr Van Mierlo said that an oil spillage in the brook near Chalgrove had been reported to the Environment Agency.

“That is very disappointing given the work being done by volunteers to protect and improve this important and unique habitat,” he said. “I hope that the impact will be minimal but it shows how much education and awareness there needs to be to stop it happening again.”

The brook is featured in a documentary written and filmed by Watlington Climate Action Group co-founder Nicola Schafer and produced in collaboration with the trust.