Hard luck dogs to be stars of 2018 charity calendar 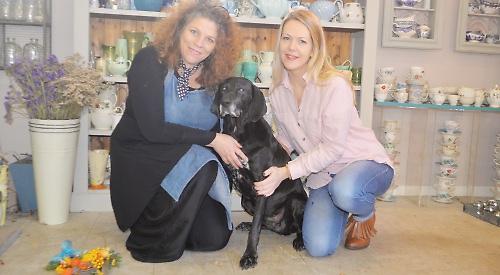 TWO businesswomen are to launch a calendar to raise money for a dog rescue charity.

They already have nine dogs, which were all rescued, for the calendar and are looking for the final three. They also need about £3,000 in sponsorship.

The calendar will be released in September next year for use in 2018 and each month will have a picture of one of the dogs taken in a studio surrounded by flowers and foliage.

Ms Weatherburn, of Albert Road, Henley, said: “The theme was ‘Blooming Marvellous Woofers’ and Jo sent in a wonderful photo of Blue with an amazing floral crown that she had designed in her workshop.

“Since then, I have admired Jo’s inspired floral projects and thought how wonderful it would be to work with her.

“We’re both clearly bonkers about dogs and we also seem to have a similar entrepreneurial spirit.”

Mrs Wise, who lives in Swyncombe, said: “When Aspen approached me about doing something together I was thrilled.

“After chatting we realised we had a shared enthusiasm for dogs and wanted to use the idea of a calendar to raise some money and awareness for the huge number of rescue dogs looking for forever homes.

“I love the idea of giving the rescue dogs of Henley their moment of stardom. At one time these dogs may have looked a little worse for wear, so I want the portraits to be a celebration. I want them to say, ‘look at me now!’”

Mrs Wise discovered some pictures by American photographer Sophie Gamand for a project called Flower Power: Pitt Bulls of the Revolution, which used floral crowns to soften the negative image of the pit bull terrier.

“The idea resonated with both of us,” said Ms Weatherburn. “We went on to discuss rescued dogs we had owned and the huge positive impact they’d had on our lives.”

In the calendar each dog will have their back story printed with their photograph.

Ms Weatherburn said: “There are a few tearjerkers but all with very happy endings. That’s the point of the project.”

Mrs Wise added: “The calendar will be high-end with an arthouse fashion feel. I’m not going for a cutesy, countrified style.

“I want it to be something you’d want to give pride of place to and keep well past the year of using it. The overall message needs to be uplifting and one of celebration.”

One of the chosen dogs is Allie, a 12-year-old lurcher saluki cross. She was rescued by Magnus McArthur and his family, of Highlands Lane, Henley, from Battersea Dogs Home in Windsor, where she was taken after being found wandering the streets.

Mr McArthur said: “She is very nervous of people and can look scared if someone appears to be annoyed with her.

“She has a few physical scars and signs of a broken shoulder blade — she really was in the wars at one time.

“But things have changed for Allie and she now enjoys a completely different way of life with our family. She enjoys daily walks and is most unhappy when she cannot fit on the sofa with the rest of the family!”

Another of the chosen dogs is Abby, a mixed breed with some dalmatian and whippet, owned by Amanda Foister and her family, from Nettlebed. The dog was adopted from Amicii, a charity that arranges foster homes for dogs from Romania.

Mrs Foister said: “Abby was a street dog who was brought to the UK and fostered by a lovely couple in Oxford, who brought her out of her shell a bit before she came to us.

“She has some trust issues, is wary of men and odd things like me doing DIY, which completely freaks her out, so I avoid that now!”

The family previously had a collie called Sasha, who had come from Battersea Dogs Home.

Mrs Foister said: “When Sasha died we were devastated but my daughter Tegan was going to university and we thought it would be sensible to wait to get another dog. Then we went to a friend’s who fosters dogs and Abby came and sat on my lap.

“ She was ours and we took her home. She definitely picked us rather than us picking her.”

Another dog taking part is Maddy, a blind Labrador owned by Victoria Dunne and her family, from Hennerton, near Wargrave, since 2005.

Maddy’s eyes were removed due to secondary cataracts and glaucoma due to generalised retinal atrophy.

Mrs Dunne said: “I’m shocked by the number of people who stop to comment because Maddy has no eyes and are surprised we did not put her down.

“She is the most incredible dog. If I had known she was going to go blind when we got her I might have questioned taking her on but in reality she has been the most amazing dog. This is to raise awareness for rescued dogs — just because there is a little thing wrong with a dog does not mean they are not going to be a great pet.”

A percentage of the proceeds from the calendar will go to an animal welfare charity.

Ms Weatherburn said: “We are now at the stage where we are looking for a sponsor or sponsors.

“Maybe there is a local company, or individual, who would be willing to fund the project in return for advertising or just a very generous individual who loves dogs as much as Jo and I do!”

If you would like to sponsor the calendar or put your dog forward, email aspen.weatherburn@me.com