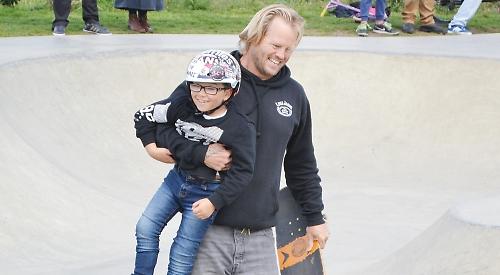 THE mother of a Henley boy who has spina bifida is raising money for a specialist wheelchair so he can go skating with his friends.

Angela Sleet, of Gainsborough Hill, says eight-year-old Ben likes playing with his friends at the skate park in Makins recreation ground but can’t do this at the moment because his current wheelchair is too cumbersome.

She has identified a range of sports wheelchairs which would give him more stability but they cost more than £2,000 each which she can’t afford.

Mrs Sleet, who is a full-time carer for Ben, hopes that an online fund-raising campaign will help.

She said: “All I want and dream of is for my special, brave little man to have the freedom to enjoy life despite being in a wheelchair.

“He likes to join in with sport and activities but he can’t like this. It’s too dangerous as the chair is so heavy and big that he would hurt himself. He has tipped over twice in his wheelchair in the school playground.”

Ben, who goes to Valley Road Primary School, can only walk with a zimmer frame and both his legs in braces. He also has club foot and a dislocated left hip as well as suffering from epilepsy for which he takes regular medication and hydrocephalus.

Despite this, he dreams of becoming a professional freestyle wheelchair sportsman and spends almost every day with his mother at the skate park. He knows most of the skaters and some even wheel him along on their skateboard or let him roll along on his belly.

Mrs Sleet, who lives with husband Mick, and other children Gemma, 22, and Liam, 16, says Ben would only use the sports wheelchair when he was not at school.

She said: “It’s so he can join in with everybody else and do everything they can do. He already thinks he can!

“It’s frustrating because Ben loves the skate park. It gets so crowded and he wants to chat to everyone there and make friends. I’ve never known anyone make friends as quickly as Ben.

“He was on a little skateboard last week whizzing down the ramp and he loved it, although he did graze his knees!”

Ben, who was taken for a ride by skateboarder Richie “Geordie” Inskip at the official opening of the £290,000 skate park in August, said: “I want to skate with my friends but my mum won’t let me on my walker.

“My favourite part is playing with my friends and it makes me annoyed when I can’t. I want this new wheelchair quite a lot.”

The Henley Skatepark Initiative, which helped raise money for the new skate park, has set up a fund-raising page designed to raise £2,500 and this has already brought in more than £1,000.

Chairman Colin Brathwaite said: “I first met Ben at the recreation ground a few months before the skate park was opened and the first thing that struck me was how much joy he had.

“He’s all smiles and laughter for everyone and he really made an impression on me.

“When I heard he wanted to be a wheelchair motocross athlete and wanted to get a chair I thought it was a fabulous idea and just wanted to help him.

“He just wants to be able to use the skate park with his able-bodied friends. We want to knock down barriers, not put them up.”

Lots of donors have also left messages for Ben.

Carol Ingram said: “Best of luck in raising this money and I hope the young man gets to the skate park very soon!”

The skatepark initiative has also tweeted the fund-raising page to celebrities including comedian Russell Brand, who lives near Henley, and wheelchair motocross athlete Lily Rice.

• In 2016, Henley Lions Club bought Ben a specially adapted £2,000 tricycle so he could go out with his friends.