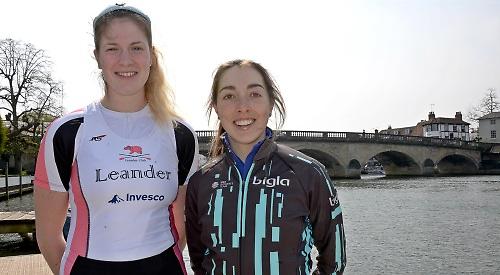 THOUSANDS of spectators will descend on Henley and the surrounding villages when an international women’s bicycle race visits in the summer.

The third stage of the sixth annual OVO Energy Women’s Tour will start in front of the town hall in Market Place at 10.30am on Wednesday, June 12.

The riders will then follow a 91-mile route through the South Oxfordshire countryside and beyond.

Organisers say up to 25,000 people could line the course with between 5,000 and 10,000 in Henley and a similar number at the finish line at Blenheim Palace, near Oxford.

Sixteen teams of six cyclists from around the world will parade slowly along Hart Street, Thames Side, New Street and the top half of Bell Street greeting spectators.

The only British team will be Drops, which includes Olympic team cycling pursuit champion Elinor Barker and European championship medallist Manon Lloyd, although British riders will compete in other teams.

The riders will leave Henley via Northfield End and Fair Mile before the race starts in earnest.

They will race through the Assendons, Stonor, Pishill and Christmas Common before entering Watlington from the south-east via Hill Road.

They will then follow Spring Lane into Brook Street, take the B4009 into Britwell Salome and cycle up Britwell Hill to join the B481 and pass south through Cookley Green, Park Corner, Nettlebed, Highmoor and Peppard.

They will then turn off through Gallowstree Common to join the A4074 at Cane End, where they will briefly head north before taking the westbound B4526 through Goring Heath and Crays Pond to Goring. On arriving in the village via Reading Road, they will turn north on to Wallingford Road and follow it past South and North Stoke to turn west at Crowmarsh Gifford towards Wallingford.

The route proceeds westwards through Didcot, Wantage and Faringdon, then curves back to the finish via Burford, Charlbury and Woodstock.

The riders will be accompanied by 30 police officers and 30 marshals on motorcycles, some of whom will ride ahead to enforce “rolling” road closures which will come into effect 20 minutes before the pack arrives.

The route was unveiled at a launch at Leander Club in Henley on Monday attended by European mountain bike champion Sophie Wright, who will be part of the Swiss team Cervelo Bigla.

She was greeted by Leander rower Georgie Brayshaw, who talked to her about life at the club and cycling in the Henley area, then showed her the clubhouse and its gym.

Miss Wright, 20, from Norwich, said: “This is the first time I’ve been to Henley but it seems like a really lovely place with some beautiful riding. The town obviously has a huge rowing culture but the two sports are closely interlinked and it will be good for the town to host such a prestigious event.

“Hopefully, people who ride recreationally will be inspired and excited by the atmosphere.”

Miss Brayshaw, 25, who moved to Henley from her native Leeds to join Leander in 2017, said she and her fellow rowers often cycled through the same villages as part of their training.

She said: “This is a beautiful area for cycling and it’s great that it’s getting a bit of promotion. Rowing and cycling go well together as they use the same basic skills and for me it’s a great break from being in a boat.

“Cycling is very accessible and it’s very important for children to be involved as I didn’t get into sport until I was 21. I’d have got into it far sooner if I’d known more about it.”

Also present was sports presenter Laura Winter, who used to live in Henley and presents the royal regatta’s live coverage for BT Sport. She is a keen cyclist and has campaigned for women to have greater recognition in the sport.

She said: “I’ve ridden part of the course so I know how difficult it’s going to be. It will be quite an attritional race, especially when going up Britwell Hill, which is incredibly tough.

“This is going to be a brilliant stage for women’s cycling and anything which marries that with Henley’s strong sporting culture can only be a good thing.”

SweetSpot, which is organising the event in partnership with Oxfordshire County Council, says businesses will benefit from the event as at least 40 per cent of spectators will visit from outside the area.

There will also be about 400 security guards, stewards and cameramen who will stay in local accommodation where possible.

The event will be filmed for television from both the ground and a helicopter.

Contractors will start building a stage from about 4.30am on the day and competitors will change and warm up in a section of Greys Road car park which will remain open for fans to greet them. The cyclists will be called to the stage and introduced to the spectators before setting off.

Organisers say everything will be packed away within about two hours of the race start.

Gabby Heycock, the county council’s project manager, said: “This will bring economic benefits and also show families and young girls that there are opportunities in the sport at the highest level.

“On a more day-to-day level, we also hope this will motivate people to get their bikes out of their sheds and get active. We hope it will inspire children to see sport and physical activity as an important part of their lives.”

Nick Bull, of SweetSpot, said: “Henley is historic and has incredible links to all kinds of sporting events so it is a natural fit.

“We’ve had great feedback for the idea and can now only hope the weather will be favourable.”

Henley town and community manager Helen Barnett said: “This is a fabulous event for Henley which we’re very excited to be hosting as it will increase interest in health and wellbeing, which we have been promoting.

“Statistics show that the race has brought considerable economic value to other areas and we will be encouraging businesses to capitalise on that as they will have a very short window.

“There’s going to be a huge crowd in the town centre and along Fair Mile, all of whom will need to eat and drink and shop, so retailers must start work early enough to accommodate that.

“We’re very lucky to already have a number of high-profile events in the town and this is an added bonus.”