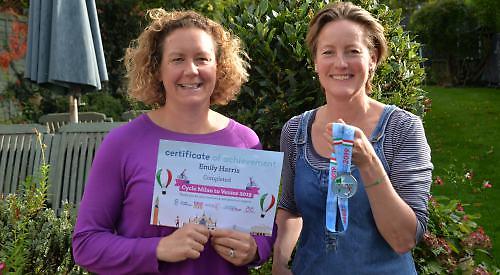 TWO friends from Wargrave helped raise nearly £6,000 for charity by completing a cycling challenge through Italy.

The pair were raising money for Women V Cancer, which funds research into ovarian, cervical and breast cancer, at the suggestion of a friend, Victoria Wickens, who had already signed up for the challenge.

They were part of a five-strong team of friends alongside Mrs Wickens, Alex McArdle, from Waltham St Lawrence, and Lucy Brooker, from Shurlock Row, most of whom first met as parents at Robert Piggott Infant School in Wargrave.

They had to raise a minimum of £1,600, which they did by holding a series of fund-raising events, including a coffee morning, an adventure race and charity art night. Mrs Hall, 47, lives with her husband and four children in Blakes Road and is an art teacher at the village schools and Mrs Harris, 43, is married with two children and is a self-employed graphic designer.

They flew to Milan from Gatwick airport and then all five women spent a day sight-seeing, including a visit to the city’s cathedral.

On the first day of the challenge, they cycled 115km to Brescia. The next day they rode to Verona before the last and longest leg of 132km on the third day.

The ride took in the southern edge of the Dolomites, Lake Iseo and Lake Garda.

Mrs Hall said: “It is just such a beautiful country and we were both feeling excited and the whole experience was so amazing and uplifting. We were probably most tired by the end of the first day because we had not slept very well the previous night and we had to get up early to leave.”

Mrs Harris said: “The challenge was hard work and it nearly broke us at times. We were constantly cycling but it was amazing to see these brilliant views.

“Part of the fun was getting to meet other people. There were some really inspiring women who had done the ride lots of times and one woman was about 75.

“As we were going into Venice we had this feeling that we didn’t want it all to end and we started singing.”

When they reached the finish line, the women celebrated with Prosecco.

Mrs Hall also visited the family she had worked for as an au pair in the early Nineties when she lived in Italy while studying for an Italian degree. “I had not been back for ages,” she said. “Going to see the family was probably the highlight for me.”

The event was organised by Dream Challenges, a fund-raising management service which has raised more than £20 million in the last 10 years.

It is part of a series of women-only cycling challenges in aid of Breast Cancer Care, Jo’s Cervical Trust and Ovarian Cancer Action.

Mrs Harris, whose aunt died of cancer in her forties, said: “It is something that affects so many people and we both wanted to raise as much as possible.”

The women stayed in Venice for the day after the challenge and enjoyed a gondola ride.

To make a donation, visit bit.ly/33bp5hl