Tour Of Britain welcomed in Nettlebed 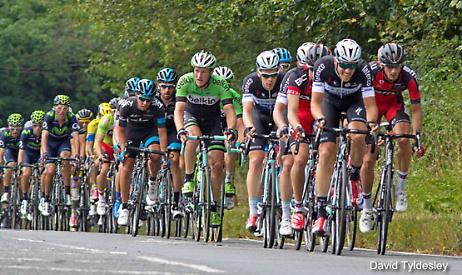 SCORES of people lined the streets of Nettlebed when the sixth stage of the Tour of Britain passed through the village on Friday.

More than 100 cyclists entered from the west, then turned north up the B481 towards Watlington.

They were competing in the Bath to Hemel Hempstead leg of the race, which finished in London on Sunday. 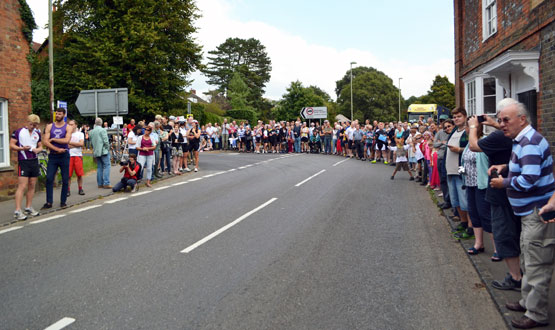 A crowd of residents and members of several local cycling clubs gathered at the junction and cheered loudly as the riders passed.

Some stood taking photos and videos on their mobile phones while others lounged in deckchairs on the grass verge.

The first rider to arrive was Briton Alex Dowsett, who finished the stage in second place. Behind him was Austrian competitor Matthias Brandle, who went on to win the stage, and fellow Brit Thomas Stewart, who came third.

The remaining cyclists passed through in one large group five minutes later.

Among them were British favourites Sir Bradley Wiggins and Mark Cavendish.

Dozens of police officers and stewards on motorcycles rode alongside the riders followed by a convoy of cars carrying spare bikes.

The group travelled north through Christmas Common and then onwards to Princes Risborough.

Police closed the road about 15 minutes before the cyclists arrived in Nettlebed and re-opened it as soon as they were gone.

Pupils from Nettlebed Community School, who have been studying the race in class, were allowed out to join the spectators.

Headteacher Paul Hankey said: You should have seen their faces  they were even cheering the policemen before the cyclists came. They just loved it.

The cyclists are good role models for the perseverance and discipline that comes with professional sport.

Staff and volunteers from the Sue Ryder hospice at Joyce Grove also watched the riders go by and handed out flags bearing the charitys logo.

Regional fund-raiser Moira Logie said: We knew a lot of people would be there so we wanted to join in. The policemen really got people into the spirit of things and were giving all the children high-fives.

It was wonderful even though the cyclists were going so fast that you couldnt see them. It was great to be part of it.

Click here to view our picture gallery of the peleton passing through Nettlebed.