Intriguing ‘thread’ is well worth picking up 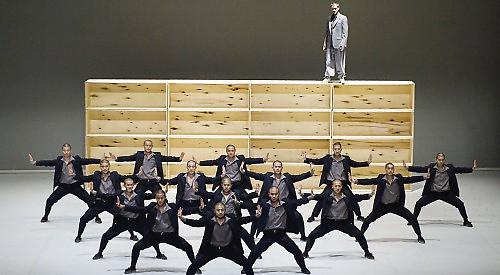 TAKE 20 “warrior” monks from the Shaolin temple in China, including one remarkable boy monk, add a Belgian dancer (Ali Thabet), plus 17 wardrobe-size wooden containers, keep the stage bare and austere, and include an off-stage music quartet which sounds sometimes western, sometimes eastern, and you have the spectacle playing at the New Theatre Oxford on March 23 and 24.

It's called Sutra, which is a Sanskrit word for thread, and is a fusion of western and eastern styles, fluid ballet moves and balletic kung fu-style action, including staves and ornamental lances.

The boxes, designed by sculptor Antony Gormley, are as versatile as the dancers: sometimes coffins, or shells, or places to hide away.

Ranked together, they can turn into a wall or an island, while in different patterns they become a miniature Stonehenge or topple one another down like dominoes, or expand like a lotus.

Directed and choreographed by Sidi Larbi Cherkaoul, this is a very unusual show, and it was enthusiastically received by the audience.

The thread of the title might be the link between the different dance episodes, some gentle, some athletic, some hyper-active.

Or it might be the growing connection between the single western dancer and the monks.

He starts as an outsider at the corner of the stage but by the end he is at one with them, in the centre of things.

Sutra is an intriguing glimpse into a different world.

Tour dates can be found on the Sadler’s Wells website.