Strictly stars of the future 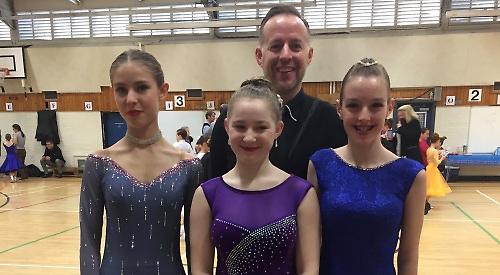 Lucy Herbert, 12, who attends the Miles School of Dancing at Henley town hall, was awarded second place for her waltz and third place for her cha cha at the youth ballroom dancing competition in Lymington in February.

Fellow students Jenna Sleath and Lucy Latimer also took part in the event and Jenna was also awarded second place for her waltz in the open class.

Lucy, who lives in Elizabeth Road, Henley, with parents Rachel and Dan and brother Adam, 10, started at the school when she was a pupil at Valley Road Primary School.

Her mother arranged for Richard Miles, who runs the classes, to visit the school, where she is a teacher, and he later ran after-school sessions.

Lucy’s grandparents Keith and Miriam Walker had previously attended classes run by Mr Miles, who teaches at the town hall on Mondays and alternate Saturdays.

Lucy, who now attends Gillotts School, said: “I’ve been doing it now for about two years. You pick it up quite quickly and Richard is a good teacher.

“I like the jive because it’s fast and the quickstep.

“It’s just really fun and also quite glamorous wearing the costumes. When you start off you have quite plain colours but it gets more glamorous and pretty with more sequins!”

The girls entered different classes at the competition in Hampshire so they were not up against each other.

They had to dance a ballroom number, either a waltz or foxtrot, followed by a Latin dance, a cha cha, rumba or samba.

The girls wore special sequinned gowns for the event.

Lucy said: “It was nerve-wracking but really fun. I’d been rehearsing quite a bit and had done those dances before. I’m going to keep going with dancing and hopefully I can become a
professional.”

Jenna, 14, from Oxford, started at the Abingdon Dance School when she was just eight. She said: “I had seen Strictly Come Dancing and loved the dresses. I started taking exams after a month at the school and took 32 in total while I was there as well as doing a couple of competitions.”

She joined the school in Henley when she was 12.

She said: “I love Richard. He’s so passionate about dancing and makes it really fun. I’ve only done two exams since I’ve been here.

Mr Miles, who runs other classes in Shiplake and Caversham as well as after-school clubs, was delighted with the girls’ progress.

He said: “Lucy started at the beginning when I did an after-school club at Valley Road. She came along with a number of other kids and since then has pushed herself hard, taken exams and done two competitions.

“It’s quite difficult to get into competitions and put yourself out there so she has done extremely well in a short space of time.

“Jenna had been dancing before so it was about giving her confidence to believe she can push herself even further.

“I’m all for getting the best out of them. Some kids don’t want to do competitions and that’s fine. I just open the doors to get them to see what they can achieve.”