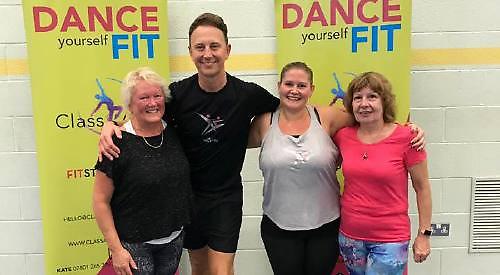 DANCE and fitness classes have resumed at Sonning Common village hall after the coronavirus restrictions were eased.

Kayleigh Rixon, of Dance Fit Fun, has been giving classes at the hall in Wood Lane for three years.

But this came to an end in late March when the lockdown was brought in.

Mrs Rixon, 34, continued classes for her students online via Zoom and in June she trialled some outdoors.

Now her group is one of the first to be back in the hall, which
re-opened on September 2 after the parish council carried out deep cleaning and redecorated.

An emergency covid pack has been placed in the hall with PPE and guidelines on what to do if someone falls ill.

Mrs Rixon, who lives in Caversham with her husband Ben, 35, a printer, and daughters, Mia, eight, and Lily, six, has been dancing since she was three when she started at the Jeannine Greville Dance School in Henley. She has also had training from Strictly Come Dancing professional Ian Waite, from Reading.

She teaches her mainly older peoople a range popular dances from the charleston to the rumba.

Mrs Rixon said: “Pretty much as soon as the lockdown was announced I looked into Zoom lessons. I didn’t charge people, I just wanted to help keep them going.

“My husband Ben joined in with some of the Zoom lessons. The ladies loved seeing him dancing in the back of the video, sometimes getting the steps wrong. He quite enjoyed it but he did hurt his back.”

Her outdoor classes were held on Peppard common and in the car park at Dunsden village hall, where she also holds classes.

Mrs Rixon, who used to work as a bartender, said: “It was hard work. I don’t know if it was because it had been a while since a normal lesson or because we were dancing on grass.”

For groups like hers, returning to the hall, covid-19 protction measures have been put in place. Rubber circles have been placed on the floor to ensure social distancing guidelines are met and a track and trace system is in place.

Mrs Rixon’s dance classes have been reduced from a maximum of 20 people to 12 and two overflow sessions have been created so everyone can still join in.

She said: “The ladies have formed real friendships here and it was so nice to see people in person again. Everyone was so happy dancing and feeling that sense of routine again.”

“She carried on by using Zoom and I quite enjoyed it but it was still difficult.”

Mrs Rixon still runs a Zoom class on Tuesday evenings for women who are uncomfortable about returning to class.

She choreographs her own dances and changes them every eight weeks.

Other groups which have started using the village hall again are the WI and a baby group.

Parish clerk Philip Collings, whose office is in the hall, said: “It’s nice to see everyone and be able to use the hall again. The whole purpose of it is so people can meet there and hold different activities.”