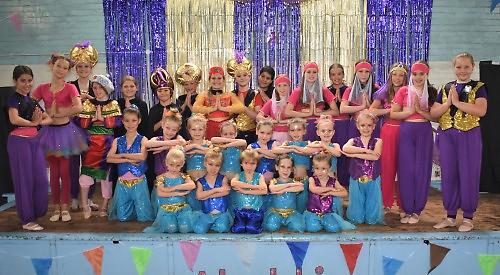 A HENLEY performing arts school has staged its first public performance since the coronavirus pandemic began.

Thirty children aged five to 11 from Steph’s Divas and Dudes Dance Academy appeared in The Magic Lamp, a musical loosely based on Disney’s version of Aladdin.

They began rehearsing just five days before stagng the show at Trinity Hall in Harpsden Road for a small audience of parents.

Steph Maxwell, who runs the school, choreographed the dance moves to songs from the Disney film and the show ended with a surprise blast from a confetti cannon at the audience.

Mrs Maxwell said: “The children absolutely blew us away with how much they were able to learn in such a short time. It was remarkable considering that they only had four-and-a-bit days to rehearse.

“Some have done these shows many times before while others were newcomers but they all did themselves proud.

“It was great for them to do something that’s confidence-boosting after such a rubbish year.

“There were a few little nerves before the show began but they were so proud of their performance and so were their parents.”

Since the coronavirus began in March last year, the school has only been staging classes online.

Mrs Maxwell said: “It’s absolutely amazing to be back in action as coronavirus was a tough slog and it’s a totally different experience to see the children face to face.

“I’m so happy to see their smiles again — it’s the best part of the job.”